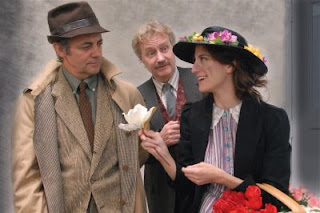 
Summer Theatre of New Canaan has come a long way from its inception, when the audience brought its own chairs and blankets and sat under the stars (or storm clouds) on a grassy knoll to watch a Shakespeare play performed on an open-air, platform stage. Now it has found a convivial home at Waveny Park under a sheltering tent and has opted to eschew the Bard in favor of tried and true musicals such as “My Fair Lady,” which is the opening offering of STONC’s 2012 season. Yet, there is still a “Let’s put on a show” feel to what STONC is doing, and it by and large works.
Certain shows are haunted, if you will, by the actors who first created the pivotal roles: think Yul Brynner in “The King and I” and Zero Mostel in “Fiddler on the Roof.” Such is the case with “My Fair Lady.” Rex Harrison and Julie Andrews.
Try as you might to wash your mind clean of these performances as you hear the opening strains of the overture, you can’t help but remember. Thus, like it or not, one of the challenges of producing…and acting in…”haunted” musicals is to deal with the ghosts. In the case of STONC’s “My Fair Lady,” Richard Sheridan Willis, who play’s Professor Henry Higgins, the role originally created by Rex Harrison, cuddles up to the ghost and in the process gives us a “Rexy” Higgins that is almost dead-on, save for some excessive body language and constant movement.
However, Jazmin Gorsline opts to give us an Eliza Doolittle that, based on productions I have seen, is (perhaps with the help of director Allegra Libonati) all her own. It’s like she is saying, yes, Julie Andrews once played the role, as did Audrey Hepburn in the film version, but here’s my Eliza, more feisty and forward, and, like her or not, this is what you get. Hence, as the musical unfolds, Willis kept on reminding me of Harrison, while Gorsline…well, I forgot Andrews and Hepburn, not because I wanted to but Gorsline made me do so…and thus her performance is worth the price of admission. She’s simply a wonderful Eliza, shining every moment she’s on the stage.
That’s not to say there aren’t problems with this production, although the positives far outweigh the negatives. One problem is the damn stairs in Professor Higgins’ abode, which is part of the tripartite turntable set (designed by Charles Pavarini III) that dominates center stage. One of Allegra Libonati’s tasks as director is to block her actors movements, which basically means telling them where to move in each scene, and since these stairs dominate, she has her actors moving up and down these stairs with, quite often, no more motivation than, well, they’re there, so let’s use them. Some of the movements, and moments created, are effective, while others are just…movement for movement’s sake. I’m going up the stairs and now I’m going down…and then up again. Don’t ask me why.
This “works” and “doesn’t work” extends to the performances of the actors portraying secondary characters. Sandy York, as Mrs. Pearce, the ruling factotum in Professor Higgins’ household, seems to have one expression, and one somewhat stilted way of speaking, though she does shine (watch her eyes and her lips) as the silent recipient of the good professor’s complaint about why women can’t be more like men late in Act Two. Her facial features all of a sudden speak volumes.
As an avuncular Colonel Pickering, Gary Harger seems, at times, to be channeling Nigel Bruce of Doctor Watson fame, but he also has his moments, especially in the Act Two “You Did It” number. Another actor that seems to be channeling is Christian Libonati as the love-besotted Freddie Eynsford-Hill. In his rendition of “On the Street Where You Live,” you’d swear Jack Nicholson had taken possession of him: his eyes seem crazed and his smile even more so. Speaking of facial expressions, Brian Silliman as Alfred Doolittle appears to have just one, whether drunk or sober, a sort of bland befuddlement. Whether he’s pontificating about the poor or singing that he’s “getting married in the morning,” his expression remains essentially “mute.”
Much more expressive, and beautifully cast, is Anna Holbrook as Henry’s mother, Mrs. Higgins. She is both regal and arch and treats her son as the spoiled little boy that he is, but perhaps the strongest element in this production, aside from Gorsline’s performance, is the wonderful collection of young actors and actresses that plays the tertiary roles or in the ensemble. Whether they are acting as part of a Cockney crowd, butlers and maids in Higgins’ household, or members of the landed gentry attending a race at Ascot, they are superb, filling the tent with a marvelous sound and dancing (under the guidance of choreographer Doug Shankman) over the somewhat limited stage space with exuberance.
Whatever problems the production might have, the presence of Gorsline and the ensemble makes it well worth the watching. The show itself is well over 50 years old, having opened on Broadway in 1956, but it doesn’t show its age. The transformation of the flower girl into a beautiful, sophisticated lady is still mesmerizing, and the professor’s growing realization of his love for her still touching.
“My Fair Lady” runs through July 7. For tickets or more information call 203-966-4634 or go to www.stonc.org
Posted by Geary Danihy at 5:31 PM