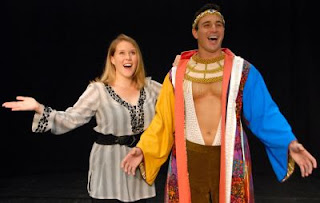 Corrine C. Broadbent as the Narrator and Chris DeRosa as Joseph

Andrew Lloyd Weber and Tim Rice's "Joseph and the Amazing Technicolor Dreamcoat" opens July 14 at the Summer Theatre of New Canaan, and will run through August 5.

This slightly skewed take on the biblical story of Joseph and his brothers is most notable for the range of musical styles that Weber and Rice were able to squeeze in: everything from 50s rock and calypso to country-western and French Apache. The story follows Joseph, son of Jacob, who is sent into exile by his brothers, only to end up one of the most powerful of men in Egypt.

Besides a cast of seasoned professionals, director Melody Libonati has added a choir consisting of area children.