"I Loved, I Lost, I Made Spaghetti" at Hartford TheaterWorks 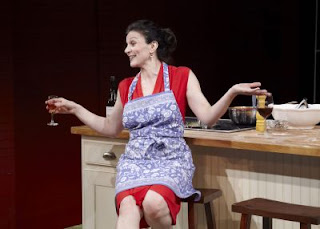 Sometimes you go out for an evening of dinner and the theater. Then there’s dinner-theater. Seldom, however, is dinner cooked and served to you from the stage by a cast member, but that’s exactly what happens in “I Loved, I Lost, I Made Spaghetti,” which recently premiered at Hartford TheaterWorks. Based on Giulia Melucci’s memoir of the same name, and adapted for the stage by Jacques Lamarre, this delightful one-woman show mixes Italian cooking with a run-through of less than felicitous amorous relationships, all served up by Antoinette LaVecchia, who plays Melucci with a wry insouciance and a perceptive sense of her character’s emotional hang-ups.
Skillfully directed by Rob Ruggiero, TheaterWorks interim artistic director, the play’s main focus is on Melucci’s search for a mate and the therapeutic value that cooking provides as the search leads the character down multiple dead-ends. One-woman shows lamenting one’s love live, with some occasional male-bashing thrown in for good measure, have been done before – Teresa Rebeck’s “Blind Dates” comes to mind – but never while the actress is preparing a three-course meal on stage – interrupted by numerous telephone calls from her mother -- that she serves to ten members of the audience who have paid $76 a pop to sit at small tables set in front of the thrust stage (it’s called “Kitchen seating”).
Over the course of the evening, LaVecchia serves up an antipasto, a salad, and finally spaghetti Bolognese made with – get this – pasta that LaVecchia makes from scratch as she relates the details of her character’s many failed relationships. If nothing else, one must marvel at LaVecchia’s ability to concentrate on the cooking while staying in character and delivering her lines, often in a rapid-fire manner as she describes the perpetual amorous rollercoaster her character has ridden.
LaVecchia, a striking brunette with a vivacious personality, expressive face and a nice ear for accents (she does a Jewish mensch, an over-the-top Charles Nelson Reilly and a Scottish writer, among others) appears to be, well, a “catch,” a woman any intelligent, cultured man would eagerly pursue, so there’s something of a disconnect between the woman we see on the stage and the stories of failed relationships (and the desperation underlying her search for a mate) that she retails. However, accept the premise and the evening is one of unrelieved hilarity interspersed with moments of poignancy. The laughs come non-stop as LaVecchia introduces the audience to one “bozo” after another, each with his own quirky nature, which LaVecchia captures with delightful verbal and physical accuracy.
Not having read Melucci’s memoir (there are signed copies available for sale at the theater), I can’t say for sure how much of the witty, sophisticated, allusion-filled dialogue is Melucci’s and how much is Lamarre’s, but that really doesn’t matter. What does matter is LaVecchia’s delivery of said dialogue, which is pitch-perfect as she introduces us to the nice Italian girl educated behind the formidable walls of a Catholic girls school who ventures out into the world of lechers and losers. LaVecchia’s facial features and her hands – in fact all that constitutes body language – convey delight, rapture, confusion, disappointment, lust, anger, haunting self-doubt and an indomitable spirit that continues to hope that the next man she meets (a clink of a wine glass indicating that once again the fires have been lit and the game is afoot) will be the one.
This is a true “feel-good” play, and the opening night audience, filled with notables, theater-wise aficionados and TheaterWorks regulars, ate it all up with relish. Yes, there was the inevitable standing ovation at the end of the evening, but in this case it was well deserved. It is not often that as soon as a play ends I think to myself, “Gee, I’d like to see this one again,” but that’s what ran through my head as I exited.
“I Loved, I Lost, I Made Spaghetti” runs through July 8. For tickets or more information call 860-527-7838 or go to www.theaterworkshartford.org.
Posted by Geary Danihy at 8:51 AM