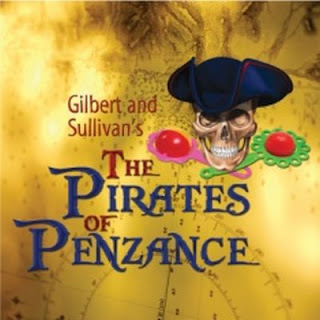 Connecticut Repertory Theatre will present Gilbert & Sullivan's "The Pirates of Penzance" starting July 12 and running through July 22 at the Harriet S. Jorgensen Theatre on the Storrs campus.

The operetta is directed by Broadway's Terrence Mann (the original Rum Tum Tugger of "Cats" fame) and stars Steven Hayes as the very modern major-general, Sean Martin Hingston as the pirate king, and Diane Phelan, a Connecticut native, as Mabel. One of Gilbert and Sullivan's most popular operettas, "Pirates" is a wacky, irreverent take on the essence of "Aarrgh!" It begins with Frederic, a young boy, being apprenticed to a pirate rather than a pilot, thanks to his hard-of-hearing nurse. What ensues is a delightful romp into the world of piratedom, complete with the fast-singing major-general, his bevy of unmarried daughters, and a coterie of tap-dancing constables. 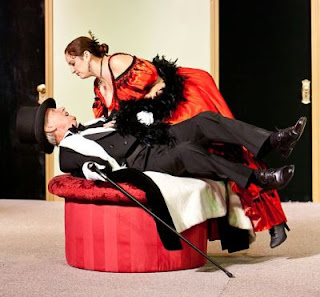 John Taylor as Charles Gounod and Sara Pannaccio as La Tartine.
Photo by Josh Siegel
Nagle Johnson's "Opera Comique" will open at the Sherman Playhouse on July 13 and will run until July 28.

This farce focuses on the 1875 opening night of Bizet's "Carmen" at the Opera Comique in Paris. It's a wacky belnd of musical history and hilarious conjecture. There are mistaken identities, many doors a-slamming, tangled relationships and ribald double entendres, plus lust, infidelity and murder. Who could ask for anything more!