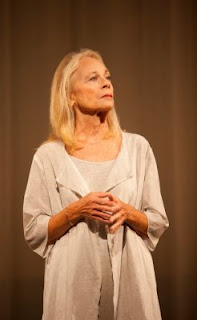 The last time I saw “The Year of Magical Thinking” my wife was alive. She chose not to attend that evening, so I went to Hartford TheaterWorks alone to see and review the play.

Now, several years later, it is over four months since she passed away – “passed away,” what a strange phrase; “away” to where I often wonder – and I am sitting in orchestra seating at the Westport Country Playhouse on the opening night of Joan Didion’s play about the death of her husband, John Gregory Dunne, and the subsequent passing of their daughter, Quintana. Over the next 90 minutes I will see a play totally different than the one I saw up in Hartford, not because the words have changed but because I have.
The magical thinking that Didion refers to in the title is a curious mindset, familiar to those who study atavistic religions and cultures, which holds that certain actions – the sacrifice of a maiden, the slaughter of a ram -- will bring about a change: the rains will come; the plague will depart. In Didion’s case, these actions include an agreement with herself that if she plays the “game,” arranges for the funeral, agrees to the autopsy, she is giving her husband enough time to return to her. If she gets all of the facts right, dates and the times, knows the names of all the drugs, understands the medical terminology, her daughter will make it through her illness. If she can just control the situation all will be well.
The production, subtly directed by Nicholas Martin, and starring the absolutely mesmerizing Maureen Anderman as Didion, plays like one of Schubert’s quintets, perhaps his String Quartet in C, his last composition, for bittersweet themes are introduced early on, played with, doubled-back on, with variations offered along the way – themes such as remorse, denial, the aforementioned magical thinking, the need to be “right” and the need to just let go. Memories are resurrected, then re-resurrected, only to be turned away from; actions are analyzed from an intellectual point of view, then analysis is tossed aside and raw emotion spins Didion’s “magical thinking” off in another direction.

The play is an extended threnody, and could, at any moment, topple over into a maudlin abyss, but Anderman gives a wonderfully controlled performance, allowing the audience to sense the emotions roiling inside her character but never allowing these emotions to burst forth. Her gestures are precise, her body language evincing a control that is part of the magical thinking, and yet you sense the powerful, dark forces lurking beneath, the urge to scream, to rend clothes, to toss a priceless vase against a wall.
The set, designed by Alexander Dodge, is spare: a gauzy, curved, pleated curtain upstage, a raked, planked platform center stage framed by a towering rectangular arch made of rough lumber, and a single, cushioned Adirondack chair set stage right on the platform. It is a dreamscape appropriate for magical thinking, a “nowhere” that allows for desperate flights of fancy enhanced by Philip Rosenberg’s lighting design, save for some follow spots that seem a bit uncertain, unsure of exactly how to frame the actress.
In the opening minutes of the play, Anderman, as Didion, warns that she is going to speak of things that the audience, in a denial that allows people to go about their quotidian tasks, doesn’t want to hear about, but she tells the audience members that it will, inevitably, happen to them. I can’t remember what my reaction was to these words up in Hartford, but as Anderman spoke them all I could do was nod, for I, too, have gone through my period of magical thinking, and yes, it will happen to all of us.
“The Year of Magical Thinking” runs through June 30. For tickets or more information call 203-227-4177 or go to www.westportplayhouse.org.
Posted by Geary Danihy at 2:54 PM