A "Golda" With Pacing Problems 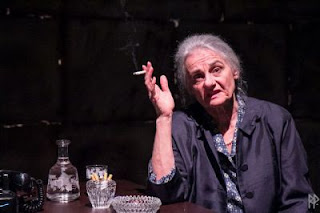 
On the heels of Playhouse on Park’s production of “Golda’s Balcony” comes TheatreWorks New Milford’s interpretation of the story of the little Russian girl who grew to become one of the guiding forces behind the creation of the State of Israel and who shepherded that young country through one of its most trying times, the Yom Kippur war of 1973.
Written by William Gibson, the author of “The Miracle Worker,” and directed by Jane Farnol, the play uses the war as a frame that allows Golda Meir (Sonnie Osborne) to reflect on her 80 some years, beginning with a memory of her carpenter father hammering planks over windows to protect the family from the latest Russian pogrom and ending with Meir, now Israel’s Prime Minister, ailing and world-weary, blackmailing the US Secretary of State, Henry Kissinger, into providing vital military supplies for her struggling nation. Along the way, she touches on her early years as a committed Zionist, her marriage to Morris Meyerson, and her growing dedication to the idea of the Third Temple, that is, the Jewish people who had returned to Palestine to recreate a homeland of their own, all underscored by the defining question: what happens when those infused by utopian ideals actually achieve power? Does a new Eden ensue, or does reality demand that one decide whether to fight or flee (once again into the gas chambers)?
The play opens with Meir confessing that she is tried, and that is one of the minor problems with this production, for Osborne’s Meir is anything but tired. She (or director Farnol) has opted to emphasize the firebrand side of the woman, so even when she says she is weary – of war, of bloodletting, of the sacrifices that she, her family, her nation and her people have been forced to make -- she does so as if she is delivering one of the speeches the young Meir made at socialist rallies in America during the early part of the twentieth century. In other words, her delivery often belies the words she is saying.
The script calls for Osborne to recreate many conversations: with her mother, with her husband, with Kissinger, King Abdullah, David Ben-Gurion, General Moshe Dayan, David Elazar (another Israeli general), Simcha Dinitz (Israeli ambassador to the United States), Lou Kaddar (her female secretary) and Pope Paul VI. The problem here is that with the exception of Kissinger, all of her interlocutors sound the same, primarily because Osborne offers these “conversations” with a rapid-fire delivery that does not allow for much nuance or interpretation. One gets the feeling that she is aware that the play is supposed to run approximately 90 minutes and she doesn’t want to go over her time limit. I don’t think the audience would have minded sitting the extra 10 or 15 minutes that would have allowed Osborne to modulate her delivery so that when she is issuing commands to her generals she spits out her words but when she is talking with her husband, who never shared her commitment to a hard-nosed, Kibbutz-style Zionism, she slows into rueful reflection.
This is not to say that Osborne doesn’t have her shining moments – she’s especially good in the aforementioned confrontations with her generals -- but the pacing of the show turns what is essentially a theatrical memoir into more of a polemic. Gibson has given the work a definite rise, climax and denouement, but director Farnol doesn’t seemed attuned to this. Hence there is little emotional release when Meir gets the call from Dinitz that helps is finally on the way from a waffling United States.
The two venues – Playhouse on Park and Theaterworks New Milford – are distinctly different, and that perhaps explains the variations in sets. However, the Playhouse scenic design, created by Jo Winiarski, gave the audience the feeling that Meir was operating out of a bunker, which enhanced the idea that she, and by extension her nation, was under siege. In contrast, Theaterworks’ set designer Richard Pettibone gives us walls made to look as if they are constructed out of blocks of sandstone (perhaps seeking to evoke Jerusalem’s Wailing Wall or the Masada fortress) with a small table and two chairs situated stage center on a raked portion of the stage. It is evocative yet, since stylized, lacks the gritty, under-seige feel that the Playhouse set added to the production. However, Pettibone, in conjunction with Scott Wyshynski, have created a lighting plot that accentuates both the light and the dark – and the horrific – that is dealt with in the play.
In sum, this “Golda’s Balcony” is a workmanlike effort marred mainly by no nod to nuance or pacing. The Golda we get at the start is the Golda we get at the end, and since she has not gone through any transformation, neither has the audience.
“Golda’s Balcony” plays on weekends through June 30. For tickets or more information call 860-350-6863 or go to www.theatreworks.us
Posted by Geary Danihy at 12:17 PM