"Joseph and the Amazing Technicolor Dreamcoat"
Summer Theatre of New Canaan -- Thru Aug. 5 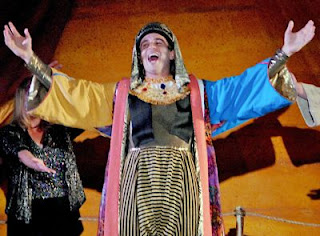 Christopher DeRosa as Joseph
If you have any old batteries sitting around the house that could use some recharging, bring them along with you to Summer Theatre of New Canaan's production of "Joseph and the Amazing Technicolor Dreamcoat." Put them down in front of you and let them soak up the energy, then bring them home and run them for six months.


Director Melody Meitrott Libonati and choreographer Doug Shankman have crafted a high-energy retelling of the biblical story of Joseph, favorite son of Jacob, that simply pulsates beneath the sheltering tent at . It’s a smile-generating production with an absolutely fabulous ensemble of young dancers and singers, plus a choir of local children, that visually and vocally satisfies on just about every level.
Though “Joseph” is in the title, this is really the Narrator’s show, and Corrine C. Broadbent delivers. This strong-voiced lady lights up the stage from the moment she appears and is simply a delight to watch. She interacts well with the children, delivers witty comments on the action with appropriate body language and facial expressions, and sells every song she sings.
Much of her interaction is with Joseph, played by Christopher DeRosa. They work well together, and the handsome, buff DeRosa is an engaging if somewhat restrained Joseph. One might ask for a bit more emotion and angst in the delivery of his signature number, “Close Every Door” – the voice is fine but the feeling is somewhat flat, as is his interaction with his brothers late in the second act when they seek succor from the Pharoah’s numero uno, which Joseph has become.
Ah, the Pharoah, the King – of course, Elvis – played by William Hammons. He’s got the gyrations, the arched eyebrows and the slurred delivery but, as with DeRosa, there seems to be something missing, some over-the-top attitude that just isn’t there – this is, after all, satire, and as such it has to over-reach while at the same time evoke. Hammons’ Pharoah comes close. He’s very entertaining, but he doesn’t exactly nail it.
Whatever reservations individual performances may engender (and they are minor), they are washed away by the ensemble performances, for this is truly what propels this show. In number after number, the ensemble, dancing and singing, makes this a joyous presentation of Andrew Lloyd Weber’s music and Tim Rice’s lyrics. You just can’t help your foot from tapping and your hands from clapping, and this urge is helped along by the fine group of musicians under the direction of Stephen Purdy that fills the tent with pulsating music that seems greater than the sum of its parts.
I return, at the end, to choreographer Doug Shankman’s work, which is superb, right down to the movement of the children’s choir. In scene after scene he fills the stage with visually satisfying motion, whether the beat is calypso, country two-step or pseudo-Fred Astaire, and it is this ensemble presentation which really sells this show, as is proven in the “Mega Mix” that wraps up the evening. Yes, the stars get to do their final turns, but the ensemble, including the children’s choir, is omnipresent and makes the tent flutter, bulge and flap. They hold nothing back and constantly overwhelm.
This is a fast-moving production – you’re in at 8 and out by 9:45 p.m. – made to seem even more so because from the opening notes of the overture you’re riveted, thus unaware of time’s passage. There’s something for the whole family to enjoy in this sprightly production, including the opportunity to picnic on the grounds prior to the show. As I mentioned in a previous review of a STONC production, the group has come a long way in a few short years and one can only imagine that it will continue to improve, much to the delight of theatergoers.
For tickets or more information call 203-966-4634 or go to www.stonc.org

For CT Theater News and Reviews.
Posted by Geary Danihy at 7:33 AM