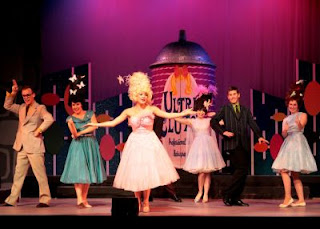 The cast of Hairspray. Photo by Anne Hudson

“Hairspray,” which recently opened at the Ivoryton Playhouse, is about transformation. A young girl, size-challenged, transforms into a TV star and a firebrand. A mother, equally size-challenged and house-bound, blossoms. And a society, shackled by de facto and de jure segregation, begins to shrug off its chains -- all accomplished to the pulsing beat of rock and roll music circa 1962. Under the direction of Jacqueline Hubbard, this bouncy, breezy, message-laden musical, with book by Mark O’Donnell and Thomas Meehan, music by Marc Shaiman, and lyrics by Scott Wittman and Shaiman, is an audience pleaser that, however, in this case, seems somewhat smaller than it should be, even though it boasts one of the largest casts ever to grace Ivoryton’s diminutive stage.

Based on the John Waters indie film of the same name, the musical focuses on the Turnblad family: Tracy (Jill Sullivan) the daughter whose biggest dream is to be a regular on the Corny Collins (Sam Schrader) show (think “Bandstand” in a B-market, i.e., Baltimore); Edna (Michael Barra), the agoraphobic, oversized Mom; and Wilbur (Neal Mayer), the understanding Dad who owns a magic shop.

Tracy’s quest to get on the teen TV show, and to win the heart of its leading heartthrob Link Larkin (Justin Gerhard), soon morphs, for no apparent reason other than plot necessity, into a desire to integrate the dance show, much to the consternation of the show’s producer, Velma Von Tussle (Tara Michelle Gesling) and her “regular on the show” daughter, Amber (Bethany Fitzgerald), who thinks she has Link wrapped around her crooked little finger. Tracy’s efforts lead her to ‘the other side of town,” where she meets Motormouth Maybelle (Karen Anderson), the host of the “Negro Day” segment of the Corny Collins Show, and her son, Seaweed J. Stubbs, who is attracted to Tracy’s best friend, Penny (Abby Hart), a young lady under the repressive thumb of her mother, Prudy (Melissa McLean). Initial integrative efforts lead to mass arrests, but through subterfuge Tracy gets to compete in and win the Miss Teenage Hairspray contest, as well as Link’s
heart, and successfully integrate the dance show.

Ivoryton’s production has many fine moments and many fine performances, but there are certain scenes that should take off and soar but don’t, and it’s difficult to understand why. This becomes apparent from the opening number, “Good Morning, Baltimore,” a bouncy paean to the city and the sheer joy of being alive. There should be throbbing elation here, but this seems somehow sadly lacking, perhaps because Sullivan’s vocal range simply isn’t up to the task. Her voice, pleasant enough, seems unable to “sell” a song. “Good Morning…” is a belter’s number, and Sullivan is not a belter. She’s energetic and nimble, as is evident in her many dance numbers, but she just can’t seem to translate this physical exuberance into vocal exuberance.

The ensemble backing up Sullivan in this opening number also seems somewhat muted, surprising given the size of the theater and the number of actors on stage, but this “muting” occurs in several other ensemble numbers, which leads one to question the sound design – there’s no accreditation in the program for sound – perhaps that is the problem. In any event, the sound is very uneven. At times the actors seem overly harsh and sharp and at other times strangely blurred. Sound is a subtle thing in a musical production – it succeeds best when it doesn’t call attention to itself. In the case of “Hairspray,” it calls attention to itself on a regular basis.

Staying with “calling attention to itself” for a moment, scenic designer Cully Long, whose major work here is extremely fluid, effective and period suggestive, has also given us a projection screen stage left (if, in fact, this was his decision), that presents a constant flow of period images that relate to the dialogue and songs being sung. It’s totally superfluous and distracting – you have actors doing their “stuff” and a constant flow of images stage left – why would anyone want to draw attention away from what is occurring on the stage?

Yes, there are problems, but they are outweighed by the many positives this production offers, chief among them Edna, which has traditionally been played by a man. Barra’s Edna is, quite simply, a fine piece of work. He doesn’t overwork the conceit but rather allows the fact that he is a man to subtly underscore both dialogue and song, no more so than in the absolutely delightful “You’re Timeless to Me,” a duet with her husband – Mayer doesn’t miss a beat throughout the entire evening -- that is, dare I use the word, adorable. These are two pros working the moment for all it’s worth, and the result is a theatrical treat that harkensback to cherished vaudeville routines

Another plus is the work of choreographer JR Bruno, who uses the Playhouse’s limited space to great effect – both the stage and the orchestra aisles -- and creates some numbers – especially “The Big Dollhouse” and the finale, “You Can’t Stop the Beat” – that please on a number of levels: movement that is visually balanced, enhances the plot, and is emotionally satisfying

Four other performances stand out, and make the show well worth the price of admission. The first is Gesling’s Velma – she is arch and bitchy, creates the woman you love to hate, and totally entrances in “Miss Baltimore Crab.” Then there’s Anderson as Motormouth – she looks like Eartha Kitt and sings like Queen Latifa – and her two featured numbers, “Big, Blonde and Beautiful” and “I Know Where I’ve Been” – are show stoppers. The third performance worthy of mention is McLean’s, who not only plays Penny’s mom, but a butch gym teacher (girls get extra credit if they take a shower) and a prison matron, and it is as the
matron that she really shines in “The Big Dollhouse” number.

Finally, the best for last: Abby Hart as Penny Pingleton, the socially challenged best friend of Tracy. As hard as I tried, I just couldn’t keep my eyes off her (I suspect director Hubbard had something to do with this, sensing she had a goldmine here) as Hart projects an awkward young lass who is just a beat off in the dances (intentionally), uses her fluttering fingers to express her awkwardness, and delivers her lines with a delightful naïveté. It is her transformation in the final scene – from an awkward naïf to a beautiful young woman (which she is) – that is, surprisingly, the most satisfying transformation of all.

“Hairspray” is a big production for Ivoryton to take on, and by and large, the century-old theater succeeds. The house, packed at the performance I attended, just lapped it up, as well it should. This is quality musical theater. Yes, there are problems, but they don’t get in the way of enjoying a robust, vibrant and engaging t
wo-and-a-half hours that prove that “You Can’t Stop the Beat.”