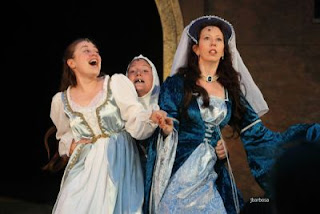 That’s all you really need to know. Go see Connecticut Free Shakespeare’s “Romeo & Juliet,” currently playing at the Beardsley Zoo in Bridgeport and then moving on to McLevy Green in Bridgeport.
I’ve been doing this reviewing gig for quite some time and I can’t remember the last time I’ve been so thoroughly entranced, not just by the production but by the whole evening, the gestalt, if you will, that CFS, under the creative and perceptive direction of Ellen Lieberman (who also did the adaptation), has created. It’s invigorating, embracing and, though the play is a tragedy, a whole lot of fun.
Fun? “Romeo & Juliet” fun? Well, yes. There’s death, I know, but Lieberman has chosen to keep death in its place and not allow it to suck the vitality out of the play -- or the evening. After all, nothing really bad happens until (in this production’s case) well into the second act. Her deft hand is everywhere, with marvelous blocking, keen character development, eye-catching, crackling stage business and an intermission that is unlike any other I’ve experienced – totally unexpected and totally delightful. It is, quite simply, a bravura directorial effort, one that rivals that of the finest productions of Shakespeare’s plays I’ve seen here, in Canada and in England.
I assume you are all familiar with the plot – the rivalry between the Montagues and the Capulets in old Verona, and the secret marriage of the Capulet’s Juliet and the Montague’s Romeo, which leads to their double suicide – so I won’t take up space with synopsis, other than to mention that the production has the best death scene of all the R & J productions I’ve attended. It’s quick, gripping and emotionally riveting.
What I will take up space with is the wonderful sense of theater as an embracing event that Lieberman has infused into the evening and the fine delivery of Shakespearean lines she has engendered in her actors. First, the latter.
Iambic pentameter, which pervades Shakespeare’s plays, is often delivered in a sing-song manner, as if there is some internal metronome in the actors that tick-tocks the lines. There’s none of that in this production. Often, when watching a production of one of the Bard’s plays, it takes five or ten minutes to adjust to the somewhat arcane verbalization. Not so with this production. From the first moment, dialogue is delivered with verve, intensity and clarity – and no slavish devotion to the “beat” inherent in the lines. Thus, characters are immediately realized, not subtly formed out of the mist of stilted delivery. Romeo (Mark Friedlander) is a young man swept up by the idea of love; Juliet (Erin Scanlon) is a young woman swept up by the idea of being a young woman in love; Tybalt (Stephen Humes) is a young man consumed by his immature passions and skewed sense of loyalty; Mercutio (Eric Nyquist) is a young man too witty, adept at swordplay and worldly-aware for his own good. It is out of this mix that the tragedy develops.
All of these actors turn in stellar performances. Scanlon is luminous as Juliet – at various moments passionate, unreasonable, flighty, delirious, distraught and – a girl. Friedlander gives us a smitten young man who can barely contain his joy at finding his true love, and yet, he also gives us a young man who, if he only paused for a moment might have averted the tragedy. He’s a love-struck Andy Hardy without a Judge Hardy to counsel him. Humes’ Tybalt is a classic angry young man who brings his doom upon himself, and Nyquist’s Mercutio is a young man who likes to walk on the edge just to see if anyone will try to push him over.
The stellar acting isn’t limited to these four. Liliane Klein’s Nurse is pitch-perfect and Jamil Mangan’s Friar Laurence is avuncular and intensely earnest. Jonathan Holtzman, Juliet’s father, is both tender and self-righteous as needed, and his wife, played by Virginia Bartholomew, is a perfectly conflicted mother.
I could go down the list of actors in the program, making positive comments for each. Suffice it to say, Lieberman has assembled a cast of very competent actors that she has guided to deliver gripping performances, and this might be, in part, due to how she has staged the intermission and the curtain call. By that I mean she has involved rather than distanced her actors from the audience. 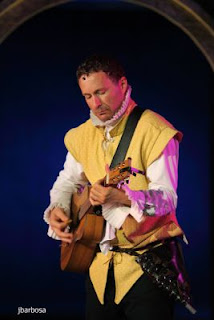 Eric Nyquist. Photo by Judy Barbosa
The intermission is normally a time for audience members to stretch and relieve themselves. Not so with this production. When it’s time for a break, Nyquist appears on stage with a guitar to announce intermission, and then, with the help of various cast members, runs through several familiar songs, ending up with an invitation for youngsters to come up on the stage to help with the penultimate number. There’s dancing and clapping and singing – by the cast and audience. This just doesn’t happen in most productions. Then, as everyone settles back in, there’s a musical synopsis of the first act.

Curtain call? Well, once everyone bows and the applause dies down, the actors normally disappear back stage. Not in this production. After the last bow, the actors move forward into the audience, shaking hands and thanking people for coming to the show. Again, totally unexpected – and totally embracing.


So, a critic is also supposed to point out failures and faults, otherwise it wouldn’t be a balanced review. And…? Well, in the balcony scene a peacock decided to perch itself on a ledge above Juliet’s head (A peacock? The show is staged in Beardsley’s Peacock Pavilion). It was, for a moment, distracting, and drew some audience laughter, but Romeo’s lines include mention of birds, so, it works out. Other than that, I don’t have a quibble.