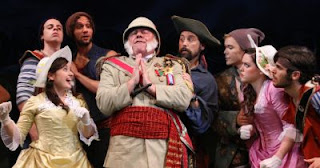 Steven Hayes, the Very Model of a Modern Major General, is surrounded
by pirates and maidens. Photo by Gerry Goldstein
Long before Captain Jack Sparrow, long before the Dread Pirate Roberts, there was the Pirate King, a seemingly nasty piece of work who’s really a softy at heart, a man who admires poetry almost as much as he admires himself and lives by a strict code that disallows abuse of orphans, he being one himself, and the attacking of any ship smaller than his own. Hence, he’s dashing and debonair, but not a very good pirate. The Pirate King is currently sailing the waters of the Connecticut Repertory Theatre in , and he is such an enjoyable rogue that a trip up to UConn to see Gilbert and Sullivan’s “The Pirates of Penzance” is well worth the mileage.
Most productions of “Pirates” are energetic, but CRT’s production is kinetic. This is made manifest from the opening moments when the pirates appear, leaping, tumbling and spinning. This entrance sets the pace, which never flags. Director Terrence Mann (Broadway’s original Rum Tum Tugger in “Cats” and Inspector Javert in “Les Miserables”) and choreographer Cassie Abate keep the cast moving in a constant whirligig of motion, acrobatics and dance that culminates in a tap-off (yes, a tap-off) between the Pirate King (Sean Martin Hingston) and the Sergeant of Police (Alex Gibson) near the end of the second act. No one stays still for very long, least of all the daughters of the Very Modern Major General (Steven Hayes), who flitter and flutter, providing a feast of color and synchronized motion.
The Pirate King role is written to be larger than life, and Hingston delivers, constantly striking heroic poses that are undercut by an equal number of pratfalls. He sneers, he grins, he prances. He also calls his band of pirates together by shouting “Day-O,” which allows the pirates to break into a calypso dance – one of the many running jokes that Mann has knitted into the production, which often pauses to allow the actors to comment on the skill and talent of fellow actors, much to the delight of the audience. Perhaps the only running gag that wears thin is Samuel (John Bixler) using “Arrrgh-speak” and then being forced to translate what he just said into the King’s English. Fortunately, this joke is allowed to disappear late in the first act.
Hingston’s stellar, over-the-top performance is matched by several others, chief among them the crowd-pleasing Hayes, who plays the Major-General as if he is fresh from doing a Bert Lahr retrospective heavy on the Cowardly Lion. He is peerless in delivering his signature song – “I am the Very Model of a Modern Major-General” – and adorable, clutching his Teddy bear, in “Sighing Softly to the River,” and Teddy bear he is forced to hold in his mouth through most of the finale.
However, as good as these performances are, they are matched and perhaps exceeded by Lynn McNutt’s turn as Ruth, the former nursemaid of Frederic (Ryan N. Phillips) a young man indentured to the Pirate King because Ruth misheard her master’s request that his son be taught to be come a pilot – she heard “Pirate.” McNutt is absolutely fabulous as the pirates’ “maid of all work” – in the first act desperate to get Frederic to love her (he having never seen another woman), and in the second, now given over to piratical ways, a lusty, sword-carrying maid of the seas.
Phillips gives us a very likeable Frederic, although in his duets with his love interest, Mabel (Diane Phelan), the Major-General’s major-domo daughter, his voice seems a bit strained, singing notes that seem a quarter-tone off. Perhaps that’s because Phelan is an exquisite bel canto singer (hence the applause from her fellow actors late in act two), and Phillips more pedestrian style simply doesn’t mesh.
Then there’s the lithe Gibson, with his marvelous vocal range, who physically reminds one of Tommy Tune – a tall man you would expect to be gangly and awkward but who moves his body with grace and precision…and a great comic sense.
To be blunt, CRT’s “Pirates of Penzance” is a hoot. There are enough sight gags, double entendres, comic asides and campy stage business to satisfy the most jaded of theater-goers, and it’s all done with a great sense of fun. It takes a talented cast to pull off a show that focuses on tomfoolery. CRT has the cast, so the tomfoolery works. Treat yourself to two hours of silliness…and exceptional talent, then go and get some ice cream at the UConn Dairy Bar.