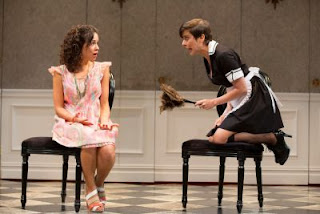 Resurrecting a 17th century play might seem an exercise in futility. After all, what can we moderns share with those who knew nothing of computers, cell phones and Paris Hilton? Of course, the lie is put to this every time a Shakespearean play is staged. Humanity is humanity, whether dressed in sweat suits or broad lace and slashed sleeves, and this is made abundantly clear in the engaging, witty, modern-dress production of Moliere’s “Tartuffe,” which recently opened at the Westport Country Playhouse.
The play, translated by Richard Wilbur and directed by David Kennedy, is a satire on religious charlatanism, pillorying the philistines who both preach to and prey on the pious. It opens with Madame Pernelle (Patricia Conolly) chastising members of her son’s household for their loose behavior (too many visitors) and, more importantly, their lack of respect for Tartuffe (Marc Kudisch), an exceedingly “holy” man who has wangled his way into the household by beguiling Pernelle’s son, Orgon (Mark Nelson), who worships the ground Tartuffe’s sandaled feet walk upon.
The rest of the family is not taken in. They all protest: the outspoken maid, Dorine (Jeanine Serralles), Orgon’s son, Damis (Justin Adams), Elmire (Nadia Bowers), Orgon’s wife, her brother, Cleante (Tyrone Mitchell Henderson), and Orgon’s daughter, Mariane (Charise Castro Smith), all to no avail. Orgon will not hear a word against Tartuffe.
The stage being set, the rest of the play deals with the efforts of those opposed to Tartuffe to open Orgon’s eyes, which they finally accomplish but, alas, too late, for by this time Orgon has already signed over his inheritance to the rogue and entrusted him with dangerous documents. Ousted from Orgon’s home, Tartuffe retaliates by going before the king to demand his “inheritance” and the arrest of the “seditious” Orgon.
Originally written by Moliere in alexandrines (12 syllable, rhymed lines), Wilbur’s translation keeps the rhymed couplet format but eschews the 12 syllables. However, the dialogue’s structure presents a potential problem. How easy it is to fall into the trap of emphasizing the dialogue’s form. Fortunately, the only actor who tumbles is Henderson, who bangs on the rhymes as if they are bells to be rung. The rest of the cast, in varying degrees – Serralles, Kudisch and Bowers succeed best at this – overcome the temptation.
The production sometimes drags, mainly because Kennedy, in these moments, has his actors simply stand and deliver their lines, especially in the early, expositional minutes of the play. Fortunately, soon after Madame Pernelle’s departure, Dorine and Mariane argue over whether Mariane should, at her father’s behest, marry Tartuffe. The stage lights up, drawing energy from Serralles’ bravura performance.
In this scene, and several that follow, Serralles basically establishes the fact that she owns the first act, enabled by Kennedy, who allows her to pull off a monumental, authorized bit of upstaging: as Mariane and her intended, Valere (Matthew Amendt) have a lover’s quarrel, Serralles sits center stage, filing her nails and commenting on the quarrel with facial expressions that range from disdain to disbelief. Hey, if the director gives it to you, go with it, and she does.
Another staged high point is Tartuffe’s seduction of Elmire – here both actor’s shine as Orgon hides beneath a table until he is finally satisfied (much too late for Elmire’s liking) that Tartuffe is a cad. Lots of nice stage business here, with perhaps the show’s funniest line coming from Elmire as Orgon finally reappears. 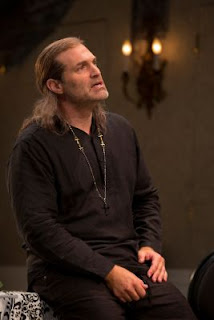 Marc Kudisch. Photo by T. Charles Erickson
Kudisch plays the cad role so well that at the curtain call he was good-naturedly booed. Seeming a force of nature, Kudisch grovels when necessary, piously orates when in preacher mode, makes lusty advances when the moment seems right and domineers when he has the upper hand.
The play ends with an extended paean to the glories of the king, who resolves everything. It’s Moliere trying too hard to please the powers that be, but in a delightful coup de theatre created by scenic designer Wilson Chin, Moliere’s sycophancy is itself satirized.
Get over the form of the dialogue and you’ll have a rollicking good time watching Tartuffe try to inveigle his way into the hearts and minds of a dysfunctional family and get his just (zapped) comeuppance.
The run is through Aug. 4. For tickets or more information call 203-227-4177 or go to www.westportcountryplayhouse.org.