"Desperate measures" -- The Spirit of Broadway 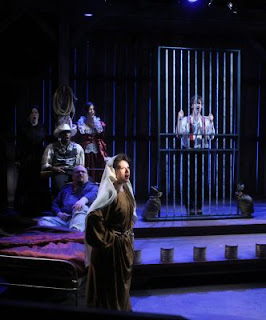 The Act One finale, IN THE DARK, performed by members of the
Spirit of Broadway Theater cast of DESPERATE MEASURES

What do the Bard, “Blazing Saddles” and the Marx Brothers have in common? Well, if you travel up to The Spirit of Broadway in Norwich you just might find out. Not going there this weekend? Okay, well, I’ll tell you. They all are drawn upon by Peter Kellogg for his “Desperate Measures,” a new musical under the direction of Brett Bernardini, Spirit’s artistic director. The result? Well, it’s a B-Movie experience, but a very good B-Movie experience, one that despite its limitations you just can’t help but warm to.

First, the Bard. The musical is loosely (I mean very loosely) based on his “Measure for Measure,” originally dubbed a comedy but later moved over to the “problem play” list by Shakespearean scholars. Whatever “problems” the Bard’s original play dealt with have essentially been removed by Kellogg, leaving us with comedy that sometimes teeters on the brink of farce – hell, it doesn’t teeter, it tumbles over, but that’s okay.

The Bard’s setting was Vienna, but Kellogg has placed his characters in the Old West, where we find cowboy Johnny Blood (Michael Sullivan) in jail awaiting hanging for killing a man, in self-defense, over an argument about Bella (Shauna Goldgood), a dancehall girl with a heart of gold. The Governor (Keith Johnson), a German émigré, is a strict law-and-order type who believes hanging is good for the community. It stiffens the civic spine and puts fear into the riffraff. Thus, no leniency for Johnny. The Sheriff (Corrado Alicata) has other ideas, and in an attempt to help Johnny seeks out the cowpoke’s sister, Susanna (Aline O’Connor), who just happens to be days away from taking her final vows as a nun.

The good Sister-sister pleads her brother’s case before the Governor, who offers her a deal: Johnny’s life for her virginity. Horrors! Can’t be done. But, where there’s a Will (pun intended) there’s a way, which involves both a bedroom and a wedding bait-and-switch, the latter abetted by a besotted Priest (Johnny Marion) with a Nietzsche fetish.

So, there you have it. The Bard westernized (it’s been done before). As for “Blazing Saddles,” well we have a lascivious governor, a righteous sheriff and a dancehall girl who may not be “So tired,” but certainly should be.

And the Marx Brothers? Well, in “Duck Soup,” Groucho and Harpo do a scene where they are both dressed in nightshirts and gaze at each other in what is supposed to be a mirror, Harpo mimicking Groucho’s every move. The same shtick is acted out by Sister-sister and Bella, albeit they are dressed in wedding gowns.

Kellogg has written the book in what might be termed rhymed Free Verse, with some iambic pentameter overtones. It’s not intrusive and, if you listen closely, the rhyming is often quite witty, especially when the rhymes are split between characters. The only actor who, initially, seems to have a problem with the verse is the winsome O’Connor. It’s not that she can’t deliver her lines, it’s just that, at least for most of the first act, she bangs the rhymes, that is, she puts an end-stop to each of her lines where there is a rhyme when, in fact, there should be a flow that allows the rhymes to take care of themselves. Thus, her delivery is a bit sing-song. However, as the evening progresses she seems to loosen up and by the end of the show she is simply entrancing.

Kellogg’s script doesn’t ask for subtlety and Bernardini’s direction plays to that. There are sight gags, double-takes, and humorous interplay between the actors as actors, all of which serve to lighten the proceedings. Bernardini also has to address the configuration of his theater, and this presents a problem, at least from where I was sitting.

The theater has stadium seating that is set off on three sides of a modified thrust stage, with the majority of the seats facing the stage. Acknowledging that all seats must be played to, Bernardini has blocked some scenes with the actors (either sitting or standing) facing the stage, which means that their backs are to the majority of the audience. Once and it’s a minor irritant; twice, especially in such a central scene as Bella’s becoming a nun (don’t ask), and it’s off-putting. You want to see the actors’ faces as they deliver their lines and sing their songs.

And sing their songs they do. I’m always wary of attending a “new” musical, since I’m averse to atonal wailing and numbers that eschew any nod towards lyrical sensibility. Fortunately, David Friedman’s music takes pity on Luddite ears by delivering songs that are snappy, toe-tapping and even moving. I was especially taken by the “In the Dark” number that closes the first act. It’s sung by the entire cast and is the type of anthem you just want to go on and on.

There are also a couple of show-stoppers, including “Just for you,” sung by the irrepressible Bella and her true love, the cowpoke Johnny, “It’s Getting Hot in Here,” again with Bella and her two co-workers (Jeanette Kearney and Kaila Galinat), “Life Takes You by Surprise” – the entire cast -- and the tender “What is This Feeling,” one of O’Connor’s finest moments.

In all, this is a frothy, light-hearted summer treat. It’s not hard on the eyes or the ears and, as the evening goes on, simply wraps you in silliness until you succumb. Put quite simply, it’s a hell of a lot of fun and well worth the drive up to Norwich.

“Desperate Measures” runs through July 29. For tickets or more information call 860-886-2378 or go to www.spiritofbroadway.org

For CT Theater News and Reviews
Posted by Geary Danihy at 5:40 PM