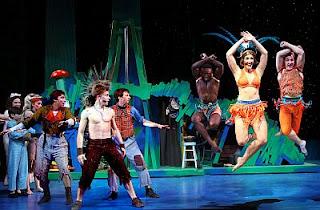 Peter Pan, which opened as a musical on Broadway in 1954, and is based on J. M Barrie’s 1904 play, has always had the feel of a cobbled together show. The central conceit is that a rather magical boy who resides in Neverland has chosen not to grow up, an idea perhaps more alluring to world-weary adults than children who can’t wait to, well, grow up. The fact that Peter can fly and, with the assistance of some fairy dust and some “lovely thoughts,” help others to do the same, adds allure, but the plot is thin, the characterizations broad, and the score less than memorable. Thus, there was an inherent challenge in Connecticut Repertory Theatre’s decision to stage this production as part of its Nutmeg Summer Series. The challenge is met, if not totally overcome. 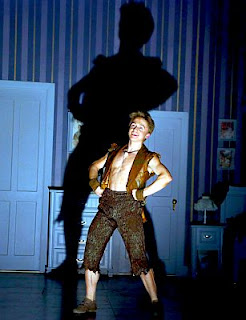 Assuming that everyone is familiar with the story (if you’re not, blame your parents and get psychiatric help), we can skip the plot scenario and get to an evaluation of the show, which stars the engaging, talented Riley Costello as Peter. Costello brings the necessary impishness to the role (which is often played by a woman – Mary Martin was the flying waif in the initial Broadway production – Sandy Duncan and Cathy Rigby have followed in her footsteps). He struts, he preens, he flies (with the assistance of much-apparent rigging) and he crows with aplomb. He also dances, especially in the engaging shadow dance in the first act and the second act’s “Ugg-a-Wugg” number, both choreographed by director Cassie Abate. 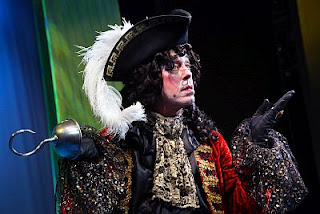 Pan’s nemesis in Neverland is the delightfully evil Captain Hook, played by Terrence Mann. This character is written as over-the-top, but Mann takes it to another level, often breaking character in the second act, much to the delight of many in the audience, but in doing so he draws attention to himself as an actor and shatters the fourth-wall illusion, making it difficult to say, “I do believe – I do believe.” His asides draw laughter, but they change the tone of some of the numbers and somehow manage to flatten the finale, which should be just a tad more poignant than it is. There’s a psychological point to be made in that the same actor plays Mr. Darling (i.e., father) and Hook that also seems to get lost in this production.

Thinking about the evening while driving home, what struck me was that the show, well-produced and technically correct, lacks a sense of wonder and whimsy. There are certainly enjoyable moments: the flight of Peter and the three Darling children – Wendy (Maggie Bera), John (Troyer Coultas) and Michael (Atticus L. Burrello) – over the darkened London rooftops is nicely handled via scrim and Tim Brown’s projections; Hook’s “Tango” and “Tarantella” are humorous; the aforementioned “Ugg-a-Wugg” number is engaging…and yet… 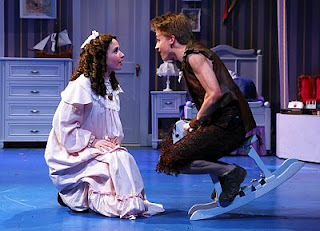 There’s a ragged side to the production, and that comes any time there are chase scenes, and they are numerous. Always difficult to block or choreograph, they can turn into nothing more than random movement. There’s a lot of leaping, a lot of helter-skelter, but it really doesn’t amount to much and, after a while, it all simply feels like fill.

Perhaps the most deadening scenes are the lead-up to the show’s finale, which involve Peter’s “tribe” of lost boys, along with the Darling children, first being captured by Hook and his henchman Smee (Jonathan Cobrda) and the other “Aarrghing” pirates, and then eventually being rescued by Peter and Tiger Lilly (Annie Wallace). Brown’s scenic design essentially squeezes and squashes a lot of the action and Abate’s direction here seems less than inspired: as the lost boys are being captured they are filtered through a doorway, up onto a walkway and then down stairs, all with Hook standing on a balcony with nothing much to do other than observe – it seems to take forever. The subsequent “battle” and rescue is an amalgam of faux swordplay, posings and postures, with little or no sense of pleasing visual aesthetics. At this point, one gets the feeling that many in the cast are just going through the motions, with some actors not really sure what those motions should be.

If you are six years old, the evening may seem magical. If you are a bit older (or, some might say, a bit jaded), it is, at times, enjoyable, at others ponderous, and sometimes even painful. Would that Peter had, during rehearsals, actually flown in and spread around a bit of fairy dust so the cast and the entire production could fly. Alas, it was not to be. Although over the evening many actors leap, spin and tumble in the air, the production never really soars.