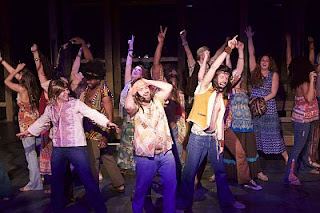 The cast of "Hair." All photos by Tibor Zoller


Playhouse on Park has wisely chosen to close out its fifth season with a show that will have audiences eager to return next season. The show is George Ragni, James Rado and Galt Macdermot’s “Hair,” the counter-culture sensation that opened on Broadway in 1968. A paean to the hippie life-style as well as a protest against war (specifically the war), the musical, under the astute direction of Sean Harris, is as relevant today as it was half a century ago, and in this production, just as exciting.

The Playhouse’s relatively confined space may seem, at first, to be a detriment to staging this sprawling musical, but Harris’s direction and Darlene Zoller’s excellent, kinetic choreography magically expand the experience – every square inch of stage is utilized, with the action often flowing out into the house. And then there’s the cast.

The Playhouse seems able to regularly gather together ensembles that are both exciting and professionally adept -- this season’s ensemble for “Spelling Bee,” for example, was nominated for a Connecticut Critics Circle award, and I wouldn’t be surprised if lightening doesn’t strike twice.

Given the close proximity of audience to actors, it is easy to see if anyone on-stage is phoning-in a performance. No one does. Energy and electricity abound. Although, technically, there are leads in the show – Ryan Connolly as Berger, Michael J. Walker as Claude, Tara Novie as Sheila and Kristen Jeter as Dionne – this is truly a collective effort. 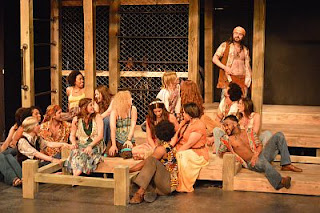 Backed by a talented eight-member orchestra that is housed in a cage stage-right by scenic designer Demaia Cabrera (who also created the costumes), the cast moves through the familiar score with an excellent feel for time and place – there’s anger, passion, youthful exuberance and, underlying it all, a sense that the free-form, all-embracing life-style may not be sustainable.

“Hair,” at least in its theatrical form, is very light on story-line (the 1979 Milos Forman film made additions/changes to provide a stronger sense of narrative). Thus, it is the musical numbers – and their staging --  that drive the evening, and although you may, at times, have difficulty hearing exactly what is being sung (Joel Abbott’s sound is just a tad mushy and the balance between single vocals and orchestration is often uneven), when you do it is a compelling experience.

That experience is certainly enhanced by Zoller’s choreography – it’s innovative and exciting and, given that the cast is in almost constant motion, surprisingly non-repetitive. It’s always difficult for an observer to know exactly who is responsible for the creation of certain visual set-pieces ending in tableaux – director, choreographer or both – but Harris and Zoller, working together, give the audience some wonderful visual moments, not the least of which is the final “funeral” scene as the cast sings “Let the Sun Shine In” – a moment that is filled with anger, frustration and hope.

The evening speeds along, punctuated by some truly memorable moments. Late in the first act, , as the Margaret Mead character, stops the show with “My Conviction.” Not much later, the entire cast moves through the pulsating “Hare Krishna/Be In” number, enhanced by Aaron Hochheiser’s dramatic lighting design, a design that also embellishes “The Trip” in the second act – a series of drug-driven dream numbers that are a more than satisfying example of pacing and emotional build to release in a musical.

Yes, you can go down to the Big Apple to see and enjoy the multi-million-dollar productions, but for my money, watching “Hair” at Playhouse on Park is more exciting. It took guts to put on this show, and it could have failed in any number of ways, but it doesn’t. For anyone who lived through the era of protest, assassinations and youthful rebellion, “Hair” will be a reminder of how fraught -- and yet how compellingly vital – that time was. For those who came on the scene later, this production will not only be an emotional history lesson of sorts (do you know who LBJ was?), it will also open some eyes: yes, Mom and Dad, or Grandma and Grandpa, used to be sexually, emotionally and politically alive and passionately committed! Of greatest importance, the evening will entertain on just about every level. The Playhouse has a winner here, so there shouldn’t be an empty seat throughout the entire run.