"And a Nightingale Sang" -- Westport Country Playhouse -- Thru June 27 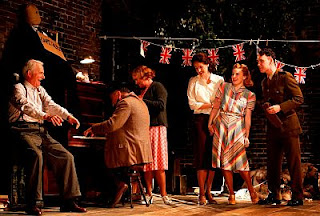 There’s a war going on, and the Stott family living in Newcastle, England, has to soldier through as best it can, what with rationing and German planes flying overhead, bombs dropping and young men going off to war, perhaps never to return. That’s the premise of C. P. Taylor’s “And a Nightingale Sang,” which recently opened at the Westport Country Playhouse. The play, written in 1977 and commissioned by ’s Live Theatre Company, will resonate based on one’s age and heritage. For Brits seeing this, or any production of this bitter-sweet comedy, there might be a lot of head nodding and whispers of, “Yes, love, that’s the way it was.” For an American audience, however, there might also be some heads nodding, but for a different reason.

Take away the frame of World War II and what we have here is a garden-variety melodrama: George (Sean Cullen), the Dad, is somewhat preoccupied with his music and his politics; Mam (Deirdre Madigan), also know as “The Saint,” is preoccupied with the church. Their marriage has devolved to mere moments of contention and convenience. Andie, (Richard Kline), a.k.a “the old soldier” (he fought in WWI), is the wise-foolish Grandfather, devoted to pets and, Lear-like, shuffling between the homes of his daughters. Then there’s George and Mam’s “pretty,” flighty daughter, Joyce (Jenny Leona), and Helen (Brenda Meaney), the “plain,” down-to-earth daughter who limps because one leg is shorter than the other. 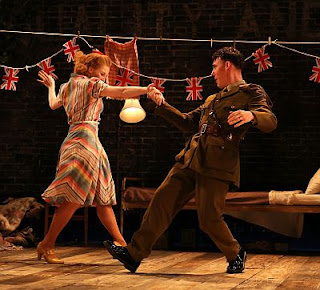 These are all, initially, stock characters, as are the two soldiers who come into their lives: the somewhat feckless Eric (John Skelley), who woos and wins (sort of) Joyce, and his oh-so-sincere comrade in arms, Norman (Matthew Greer), who is drawn to Helen. Bombs may fall, planes may strafe, but people are, after all, people (though Grandpa may disagree), and they will get themselves involved in all sorts of emotional quagmires that involve a possible unwanted pregnancy, falling in love with someone who hides his past, and making do in a marriage that functions on formality. It’s all been seen before on stage and on screens, and familiarity might very well breed, if not contempt, then at least a certain degree of been-there-done-that boredom. But wait… 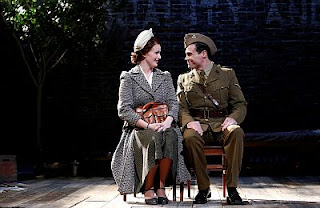 This rather mundane material is brought to life by an absolutely stellar cast under the direction of David Kennedy, led by Meaney, who is both entrancing and beguiling. Even before the play commences she is on stage, roaming scenic designer Kristen Robinson’s set (a blend of representation and presentation that works but, somehow, has the feel of a warehouse), touching and remembering, for she will not only be the primary character in the play but also its narrator, which calls for her to seamlessly shift from character to commentator, which she does with delightful aplomb. At one moment she is the awkward Helen, unsure of herself, and in the next she is the wistful, wise historian (and analyst) of her own and her family’s actions. It’s a bravura performance.

To modify an old theater bromide, there are no dull roles, only dull actors, and none of the actors on the stage is dull. Given the rather cardboard characters they are asked to portray, they infuse life and vitality into them and make you believe that these are living, breathing people, and that their problems, fears, desires and failures have meaning. 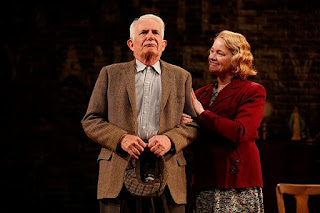 Besides Meaney’s lustrous performance, there are two other stand-outs: Kline’s Andie and Madigan’s Peggy (on Mam). Playwright has given the Grandfather character some of the play’s best lines, and Kline delivers them with a world-weary, somewhat nihilistic bent that can’t help but elicit laughter. However, it is Madigan who totally overcomes the banal character she is asked to portray, making what could have been a side-show religious zealot into a rounded character with heart, soul and feelings that hide beneath the surface of her formulaic piety (her “He touched me” scene is a wonderfully nuanced portrayal of a woman dealing with repressed sensuality).

Staged in a different manner, with a different cast, you might come away from “Nightingale” saying, “So what?” However, in the case of the Playhouse’s production, you don’t, and it’s all to the credit of the marvelous cast, though lighting designer Matthew Richards might want to take a seat out in the house – many of the instruments seem aimed more at the audience than at the characters on stage.

No, “Nightingale” is not great drama, for Taylor hasn’t really captured the reality of a society under siege, threatened with total destruction, but there’s a great deal of theatrical satisfaction to be had here, and it all is due to the skill and talent of those who are up there on the stage. So, I turn to Seneca for a final comment: “Life's like a play: it's not the length, but the excellence of the acting that matters.”

“And a Nightingale Sang” runs through June 27. For tickets or more information call 203-227-4177 or go to www.westportplayhouse.org.