Carmen de Lavallade to be Honored


The Connecticut Critics Circle has announced the recipients of Special Awards to be presented at its annual ceremony, this year to be held at The Iseman Theater in on Monday, June 22. The recipients include Carmen de Lavallade, who will receive the Killen Award for outstanding contribution to theater, the Summer Theatre of New Canaan for its DramaRamas program, the Split Knuckle Theatre Company for its production of “Endurance,” and Shawn Boyle, for his work on Yale Repertory’s production of Elevada.”

The Iseman Theater is located at in . The event, which begins at 7:30 p.m., is open to the public. Seating is limited and will be available on a first-come-first-served basis.

Carmen de Lavallade -- dancer, actor and teacher -- was a key member as teacher and performer in the early days of the Yale Repertory Theatre and the new Yale School of Drama under the tenure of Robert Brustein. She was a powerfully influential teacher to a generation of actors there, including Meryl Streep, who has often cited De Lavallade as having a profound influence on the shaping of her talent in those early days. Some of de Lavallade’s performances -- including in "The Tempest" and especially her Titania in "A Midsummer Night's Dream" -- are often cited as some of the best ever at the Rep; indeed in CT.

Now 84, de Lavallade is performing her solo autobiographical show, "As I See It," which will be playing at the International Festival of Arts & Ideas at the Festival during the week of the awards ceremony.

De Lavallade was a member of the Lester Horton Dance Theater in 1949 where she danced as a lead dancer until her departure for with Alvin Ailey in 1954. Like all of Horton's students, de Lavallade studied other art forms, including painting, acting, music, set design and costuming, as well as ballet and other forms of modern and ethnic dance. She studied dancing with ballerina Carmelita Maracci and acting with Stella Adler. In 1954, de Lavallade made her Broadway debut partnered with Alvin Ailey in Truman Capote's musical House of Flowers (starring Pearl Bailey).

In 1955, she married dancer/actor Geoffrey Holder, who died last year. It was with Holder that de Lavallade choreographed her signature solo Come Sunday, to a black spiritual sung by Odetta (then known as Odetta Gordon). The following year, de Lavallade danced as the prima ballerina in Samson and Delilah, and Aida at the Metropolitan Opera.

She made her television debut in John Butler's ballet Flight, and in 1957 she appeared in the television production of Duke Ellington's A Drum Is a Woman. She appeared in several off-Broadway productions, including Othello and Death of a Salesman. An introduction to 20th Century Fox executives by Lena Horne led to more acting roles between 1952 and 1955. She appeared in several films, including Carmen Jones (1954) with Dorothy Dandridge and Odds Against Tomorrow (1959) with Harry Belafonte.

De Lavallade was a principal guest performer with the Alvin Ailey Dance Company on the company's tour of Asia and in some countries the company was billed as de Lavallade-Ailey American Dance Company. Other performances included dancing with Donald McKayle and appearing in Agnes de Mille's American Ballet Theatre productions of The Four Marys and The Frail Quarry in 1965.

In June 2011, the Summer Theatre of New Canaan expanded its educational programs to
include a unique musical theatre program, the DramaRamas. The program is designed specifically for young people with special needs (such as those with autism, Down syndrome, developmental delays and disorders, etc.). 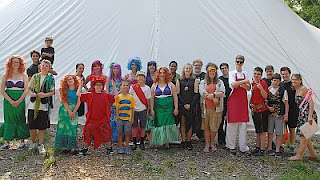 Created and directed by Melody Meitrott Libonati, Summer Theatre’s artistic director, the program matches a DramaRama actor with one of the college interns and professional actors who will be performing in the festival show. They mentor each DramaRama actor one on one, helping them interpret and perform the roles in a special presentation performance which is open to the public with free admission. While working with professional staff and volunteers, the DramaRamas learn basic performance skills such as singing, dancing, acting, and experience the magic of a professional show with a full house audience. The program has profoundly affected the students, their families, the summer theatre staff and the audience attending their performance. Many of the students return year after year.

The DramaRama program is now in its fifth year with the production of “Legally Blonde Jr.”  Previous productions have included “Frog and Toad”, “The Wizard of Oz”, “The Little Mermaid,”, and “Hairspray, Jr.”

Scholarships are made available to any DramaRama who wishes to participate regardless of ability to pay the tuition fee. The Summer Theatre of New Canaan acknowledges with gratitude the many local individuals and organizations supporting the program and continue to recognize the value of this program for its students, their families and the community in general.

Split Knuckle is a critically acclaimed company that creates dynamic, physical, visually striking theater from simple materials. The company members trained at the London International School of Performing Arts in the methods of Jacques Lecoq, leading them to through imagination, text and movement to create vast landscapes, vivid characters and epic stories. 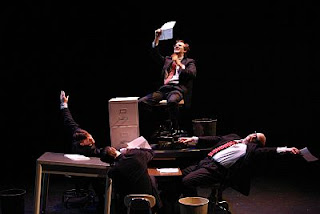 This was evident in the company’s 2014 presentation of “Endurance” at Long Wharf Theatre. With minimal costume changes – just some hats and a shawl – the actors bring to life a host of characters while physically manipulating the few props they have – chief among them desks, which serve as, among other things, a shower, an elevator, several boats and menacing towers of ice. In a review of the performance, one critic wrote: “In an era often dominated by excess and over-production, ‘Endurance’ cleanses the theatrical palate and again makes us realize what four talented actors are capable of creating…almost out of thin air.” 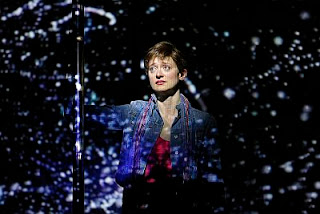 Shawn Boyle designed the projections for the Yale Repertory production of “Elevada,” which dramatically and often viscerally captured and enhanced the various moods and tensions inherent in the play. Boyle is a third-year MFA candidate at Yale School of Drama, where his credits include “Bird Fire Fly” and “THUNDERBODIES.” He holds a BFA from of the Arts at and is a member of United Scenic Artists 829.
Posted by Geary Danihy at 3:41 AM