More than Months in a Calendar 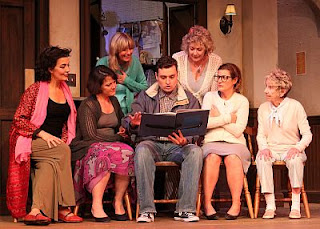 
Yes, movies and plays are different. No surprise. Movies are, by their very nature, visually dictatorial, by which I mean the camera determines what you do and do not look at. What with establishing shots, close-ups, two-shots and tracking shots, what the movie-goer sees is what the lens allows him or her to see.

Such is not the case with plays – the eye is free to roam. The lead character may be delivering poignant lines but the eye may choose to focus on a subordinate character sitting in a corner, or on a piece of scenery, or down at the program curled in one’s hands. Thus, it is the job of the play’s director to stage (or block) scenes using every trick in the theatrical book to keep the audience’s eyes focused on what the director wants them to be focused on. This, director Jacqueline Hubbard, does with skill and talent in the boarding of “Calendar Girls,” which recently opened at the Ivoryton Playhouse. Of course, it doesn’t hurt that clothes are shed during the evening – a focus-sharpener if there ever was one. 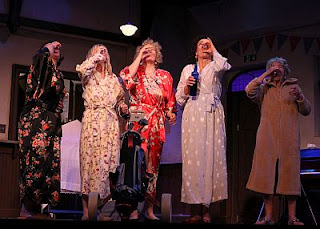 The ladies fortify themselves before the disrobing.

The rule of thumb is that movies are often adapted from novels or plays, not vice-versa. “Little Shop of Horrors” is an exception to the rule, as is Tom Firth’s “Calendar Girls,” which he adapted for the stage from a screenplay he wrote with Juliette Towhidi that made it up onto the silver screen back in 2003 starring Helen Mirren. The play, which is receiving its American premiere out at Ivoryton, is a somewhat faithful re-telling of the true story of a group of British women who decide to raise funds for the purchase of a new settee for the visitors’ room of a hospital’s cancer ward by posing, albeit decorously, for some risqué pictures that will adorn an annual calendar produced by their branch of the Women’s Institute, a church-affiliated organization that seeks to develop women’s talents by focusing on knitting, baking and attending lectures on the history of broccoli. 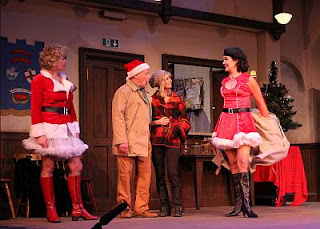 The impetus for this project is the passing of John (R. Bruce Connelly), who is married to Annie (Hubbard – yes, she does double-duty). Annie’s friend, Chris (Beverley J. Taylor), seeking to give her friend a new focus in life, suggests the project, and the other members of the local WI -- Cora (Maria Silverman), a vicar’s daughter with an attitude, Jessie (Maggie McGlone Jennings), whose wrinkles belie her feistiness, Celia (Katrina Ferguson), a golf-widow who hides liquid refreshment in her golf bag, and Ruth (Lily Dorment), a repressed “yes-woman” with a wandering husband – all eventually agree to sign up and disrobe.

The first act is essentially devoted to the gestation of the project and ends with a delightfully staged photo shoot overseen by Lawrence (Erik Bloomquist), a local photographer. The shoot is interrupted at the curtain by the arrival of the WI’s straight-laced mother hen, Marie (Victoria Bundonis). As might be expected, the calendar goes viral, and most of the second act deals with how the ladies deal with their new-found notoriety, what with the world press knocking on their doors and the sudden possibility that real money might be made from the project. 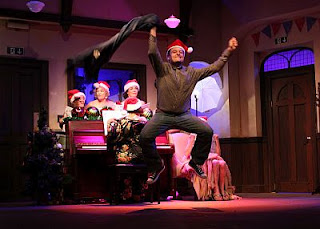 Erik Bloomquist jumps for joy during the photo shoot.

As the descriptions above might suggest, Firth has given us one-note characters, so it falls to the cast members to put flesh onto these skeletons, which they do with great success. Although you might think the play’s draw is the creation of the calendar (Yes, -- “Local actresses bare all” is a great come-on), it really lies in the relationships of the six women and the badinage that suffuses their relationships. This is established early in the first act as Chris is leading the group in Tai Chi exercises, a discipline of which she has only passing knowledge. The ladies create their own poses, each one a comment on an idiosyncrasy or hang-up of one of the group’s members.

That being said, it can’t be denied that much of the interest in “Calendar Girls” is in how the director will pull off the photo shoot, and this Hubbard does with a lot of wit and style, with the result of each set-up being projected onto screens set extreme stage right and left. With each click and flash, the audience laughs and applauds. The shots (and Hubbard’s blocking -- never was the term more appropriate) have the feel of the playfully naughty photos that appeared in men’s magazines of the 50s, before the let-it-all-hang-out of Playboy, Penthouse and Hustler left little or nothing to the imagination.

If there is a problem with the show it rests not with the actors and creative team but with the script itself, for these women, with their decision to produce the calendar, are flying in the face of local mores and morals. This is toyed with but never fully developed – it’s a Hallmark set-up, and you never get the feeling that the women are really in any danger of being ostracized.

Firth also tries to generate a bit of conflict between Chris and Annie as the possibility of fame and fortune become temptations that draw Chris away from the needs of her husband, Rod (David Edwards) and the original intent of the calendar project. Once again, it’s surface tension and easily resolved in an “I’m really a good person” scene that might make some members of the audience want to squirm a bit (or gag). It’s the stuff of banal sitcoms and poorly scripted Family Channel feel-good movies – there’s just more syrup on the pancake than one can swallow.

In all, “Calendar Girls” is a cute, often funny play that succeeds in spite of the somewhat heavy-handed, message-laden script. There were some minor technical glitches on opening night that I’m sure, by now, have been ironed out (silence and an empty stage does a lot to disengage the audience). The cast was still learning where the laugh lines are and when to hold a bit of dialogue to allow the laughter to subside but, by and large, the thirteen actors on stage are eager and effective, and the idea that you can’t keep a good group of girls down is always appealing.

“Calendar Girls” runs through June 21. For tickets or more information call 860-767-7318 or go to www.ivorytonplayhouse.org.
Posted by Geary Danihy at 4:41 PM