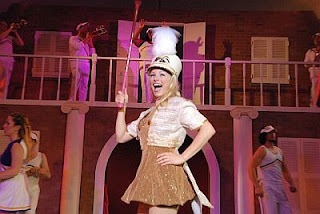 
It was a book, then it was a movie, then it became a musical, but none of the transitions has reduced the cotton-candy sweetness of Legally Blonde, that paean to blondes with brains. In its current manifestation at the Summer Theatre of New Canaan, it is as light and fluffy as ever, with an engaging cast that has obviously been well-drilled to “think pink.”

For those of you who have not been “pinkified,” this is the story of Elle Woods (Kara Dombrowski), a sorority girl from who appears to be as light in the head as she is on top of it. Elle is in love with Warner (Preston Ellis), but graduation at UCLA is nigh and , who has dreams of a political career, decides that he needs a woman who is more “serious,” so he jilts Elle.

The young lady goes into a tail-spin that involves eating , but her sorority sisters buck her up and Elle decides to apply to in pursuit of Warner. She studies real hard, aces her LSATs, and performs an untraditional “personal essay” that lands her a place in . Initially clueless about the rigors of law school, she is ejected from class by Professor Callahan (Stephen Hope) but is mentored by Emmett (Matthew Christian), a teaching assistant, and given sisterly advice by her hairdresser, Paulette (Jodi Stevens), a lady whose love-life is in the doldrums.

Elle eventually wins an internship in Callahan’s office and helps the firm win a big-money murder case involving fitness guru Brook Wyndham (Shannon Mullen), in the process showing that blondes not only have more fun but can litigate with the best of them.

If you want dramatic meat on the bones of your musical, you’ll just have to go find where Next to Normal is being performed, but if you want to just sit back and enjoy some “Omigod!” fun, then Legally Blonde is your piece of cake, as long as you don’t mind pink icing two inches high.

As directed by Allegra Libonati, with athletic (if somewhat derivative) choreography by Doug Shankman, Legally Blonde, with music and lyrics by Laurence O’Keefe and Nell Benjamin and a book by Heather Hatch, is a two-act romp complete with cute dogs, cheerleaders, a Greek (read sorority) chorus and enough bounce and spirit to keep you off Red Bull for at least a week.

Julia Noulin-Merat’s extremely functional unit set allows for easy transitions from Delta Nu’s sorority house to Harvard Yard to a courtroom (and then a bathroom complete with shower stall), with some very effective shuttered windows used for emphasis. There’s enough space for this large cast to do some flamboyant dance numbers, chief among them the “What You Want” essay and the second act’s “Whipped Into Shape.”

Driving this pink pastiche, Dombrowski is all one could ask for in a clueless blonde who actually has a clue. She is lithe, perky and completely engaging. Equally entrancing is Stevens as the boy-friend-hungry hairdresser -- she has just the right mix of moxie and insecurity. Although Ellis enters with just a tad too much smarminess (this is an aspiring Senator?) dressed for a role in Saturday Night Fever, he comes down a bit and does a nice job breaking up with Elle in “Serious,” and you can’t fault Mullen as the fitness video queen – she doesn’t seem to be breathing hard at the end of “Whipped,” a number that would put many of us on the floor gasping. God bless youth – and training.

Libonati shows she knows what she is dealing with in Legally Blonde. There’s not a serious bone in this musical’s structure, so it can easily slide into sloppy camp if the cast doesn’t sell that they actually buy into the froth. This cast does. It’s a challenge to be seriously silly, but this cast is up to the task. From the “Omigod You Guys” opening number to the closing graduation scene, there’s not a smirk to be seen. The 27-member cast sells the premise right from the start so, for at least two hours, the audience buys in.

If there’s any problem with the production it is in A & L Sound Partners sound design. The mix is off – the orchestra often overwhelms the performers, and even when there’s no music, some of the dialogue gets lost. Of course, given that this is an open-air theater, sound is tricky, but balance should go to the talent on stage rather than the musicians. However, this is early days for the show, which runs through August 9, so the sound problems should be corrected.

In all, Legally Blonde is a perfect “summer” show. It’s light, breezy and family-friendly. You have to be a dyed-in-the-wool curmudgeon not to respond to Elle and her efforts to prove that she is serious. It’s a bouncy, bright pink parfait,

Legally Blonde runs through August 9. For tickets or more information call 203-966-4634 or go to www.stonc.org
Posted by Geary Danihy at 4:14 PM