Do You Hear the People Sing? 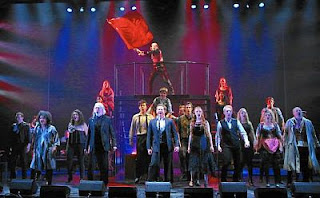 The cast of "Les Miserables." All photos by Gerry Goodstein


There are two kinds of people: those who have seen “Les Miserables” in one of its iterations and those who have not. Thus, there can be two reactions to seeing the concert version of Claude-Michel Schonberg and Herbert Kretzmer’s iconic musical that recently opened at the Connecticut Repertory Theatre on the UCONN campus. For those familiar with the show, the evening is a cooperative effort – the outstanding cast supplies the music and the audience knowingly fills in the blanks. For the uninitiated, however, the reaction might be: nice songs and stirring melodies, but what the hell is going on?

An attempt has been made by director Terrence Mann, who also stars as Javert, and scenic and projection designer Chuan-Chi Chan to help fill in the blanks via rear-screen projections, but these are somewhat murky – vague scenes of churches and buildings with less than vivid scene titles that do not draw attention to themselves. Thus, some in the audience are both literally and figuratively left in the dark, with no synopsis in the program to shed some light on the goings-on.

For those in the know, the evening is a celebration of the longest-running musical in theater history. In fact, there’s probably not a day that goes by that “Les Miz,” in one form or another, is not being performed on some stage. The initial draw for the CRT show is, of course, Mann, who played Javert as part of the original Broadway cast (it opened in 1987), but he does not have to carry the show, for David Harris, who plays Jean Valjean, an actor of equal star-power in his native Australia, is impressive as the ethically-challenged former convict. The cast in supporting roles is equally pleasing and proficient: Alex Zeto as Fantine, Chandler Lovelle as Cosette, Philip Hoffman as the inn-keeper Thenardier and Liz Larsen as his wife, Mmd. Thenardier, Ariana DeBose as Eponine, Will Bryant as Enjorlas and Joe Callahan as Marius. Supported by an energetic ensemble of young actors playing multiple roles, the primary cast delivers a cast-album performance of Victor Hugo’s sprawling tale of love, sacrifice and redemption. 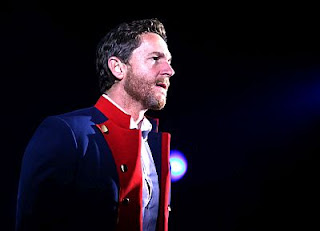 There are some quibbles, however. The first being the sound, designed by Michael Vincent Skinner. The problem? Well, often it’s just too damn loud. In fact, the decibel level had people changing seats at intermission and actually caused some people to flee the theater. When a 10-year-old places his hands over his ears you know you have a problem.

Then there’s the hybrid nature of any concert version of a musical. What to do about costumes? Should there be blocking or should the actors simply stand before microphones? It seems like Mann, along with Chan and costume designer Lisa Loen, wanted a little bit of everything. Some performers are fully costumed while others seem to be wearing modern street clothes. At some points, the actors are in front of the microphones, at others they are going up and down stairs set stage center, often for no better reason than that the stairs are there. Thus, you end up with a production that is neither fish nor fowl. 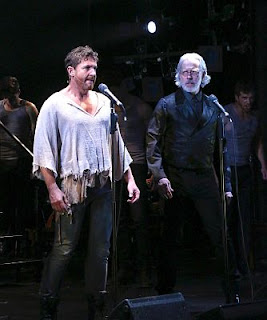 Quibbles aside, there’s no denying that if you know your “Les Miserables” you will enjoy this production. The voices are all equal to the task of selling the familiar ballads and anthems, and while the staging is, at moments, somewhat schizophrenic, all you need do is close your eyes and listen. What you will hear will be more than pleasing.

“Les Misreables,” the opening production of CRT’s Nutmeg Summer Series, runs through June 7. For tickets or more information call 860-486-2113 or go to www.crt.uconn.edu.
Posted by Geary Danihy at 5:20 AM