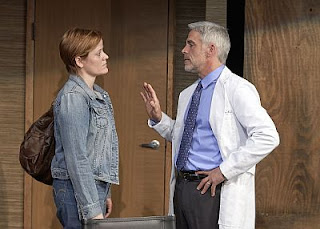 
Electricity.
The word can be defined in many ways, but for actors, it’s the two-way flow between them and the audience sitting out there in the dark. Anyone who has acted will tell you that when the flow isn’t there, when the collective wattage of the audience wouldn’t power a nightlight, it’s as if you’re working in a fog. Your fellow actors seem distant and lifeless, the character you are playing seems pointless, a sham, and you simply can’t wait for the curtain to fall so you can get the hell out of there to ponder your choice of professions.
Ah, but when the current is surging, you are transported. You’re on a high. Everything is in sharp focus and you are taken over by the character you are portraying. You feed on the energy. Time becomes relative and, when the curtain falls you find you have to decompress, somehow find a way to exorcise the character you were possessed by and enter back into your own body. The evening has been a collectively creative experience.
So, what does all of this have to do with “Good People,” David Lindsay-Abaire’s exercise in emotional manipulation, regret and sacrifice that recently opened at TheaterWorks? Well, if the performance I attended is any indication, the entire city of could be powered by the energy that flows between stage and house.
Set in – or “Southie” – and the posh suburb of Chestnut Hill, the play opens with Stevie (Buddy Haardt) taking Margaret (Erika Rolfsrud) out into an alley to fire her for consistent tardiness. Maggie tries to manipulate Stevie with references to their shared past (much of which has to do with his mother and a turkey) and the need to care for her daughter, but Stevie, pressured by management, sticks to his guns. In a tough job market, Maggie is once again out of a job with a mentally challenged daughter to care for. She soon finds herself at a bingo game (read metaphor for the vagaries of life – the role “luck” plays in whom we become), seated with her friend Jean (a delightfully acerbic Megan Byrne) and her landlady, Dottie (Audrie Neenan). As the numbers are called out, there is commiseration and counseling, and the announcement that Mike (R. Ward Duffy), an old (short-lived) beau of Maggie’s, is back in town, now a successful doctor. Perhaps, Jean suggests, Maggie can ask Mike for a job. She also suggests a ploy Maggie might use that will play a central role in the second act. Maggie goes to Mike’s office, and the emotional pas-de-deux between the two commences, a dance that will, eventually, become emotionally riveting. 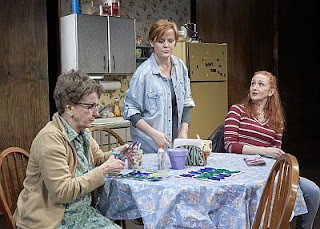 The second act finds Maggie in Chestnut Hill. She essentially invades Mike’s home, where he and his wife, Kate (Chandra Thomas), are dealing with their own inter-personal problems, a simmering cauldron that Maggie will, motivated by her own needs and the true history of her relationship with Mike, bring to a boil. The conversation begins with superficial niceties. Wine and cheese are served…and then all hell breaks loose, leading to a decision Maggie must make about what it means to be a “good person,” followed by a coda that confirms suspicions and, with the simple announcement of a bingo number, suggests a ray of hope.
As directed by Rob Ruggiero, TheaterWorks producing artistic director, “Good People” is consummate theater, emotionally involving and ultimately satisfying on many levels. It doesn’t hurt that he has gathered together a group of excellent actors to work with him, starting with Rolfsrud, who has thrilled and chilled TheaterWorks’ audiences in the past in “Time Stands Still” and “Rabbit Hole” (another Lindsay-Abaire play). Rolfsrud owns the stage from the moment she is ushered out into that alley, creating a multi-faceted, emotionally conflicted character who both engages and enrages, for Maggie is needful, proud, conniving and a master of passive-aggressiveness. She is a survivor in a game that has apparently been rigged. Rolfsrud’s work in the second act, as her character tries to find a calm, moral center amidst a swirl of emotions, is priceless. 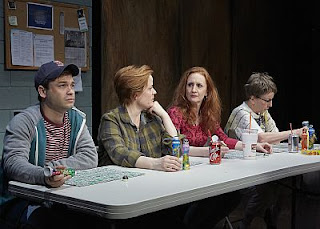 The arc of Maggie’s emotions is matched by those of Mike, and as Rolfsrud’s Maggie keeps on raising the emotional ante, Duffy responds. From their characters’ first confrontation, it’s a yin-yang game of ping-pong that becomes increasingly revelatory and visceral. Both Rolfsrud and Duffy are well-versed in using both body language and eye contact to enhance the meaning of the dialogue – the locked gaze and emotionally electric silence between the two near the end of the second act convey a truth that can’t be captured in words.
In supporting roles, Haardt, Neenan, Byrne and Thomas are equally engaging. Byrne uses a female version of the slow-burn to great effect, certainly knows how to needle, and can say volumes with a simple stare. In opposition, Neenan gives her character an annoying “dottiness” that is consistently humorous. Although there are moments when Thomas, as Kate, seems a visitor in her own home, her character’s final confrontation with Maggie is effective, and Haardt provides a satisfying, low-key balance to Maggie’s flamboyantly needful persona.
Mention should be made of the scene changes, which are punctuated and accented by filmed tracking shots (designed by Luke Hegel-Cantarella) – all in suffused color reminiscent of early Technicolor films. The scenes range from close-ups of stocked shelves in a Dollar Store to urban street scenes and a manicured suburb. Projected against Hegel-Cantarella’s bare-bones, wood-paneled “Southie” set and corresponding well-appointed suburban living room, they create a sense of nostalgia and, in an odd way, the ghosts of the past that haunt the present.
These projections are evidence that cast and creative team had a vision, an agreement about how “Good People” should be presented and what the play is about. This vision permeates the performances and infuses the entire production. Not surprisingly, at the curtain the cast got a standing-O, but you got the feeling that those on stage were saying the same thing back to the audience: thanks for a wonderful evening of theater.