Goodspeed's Got the Show Right Here 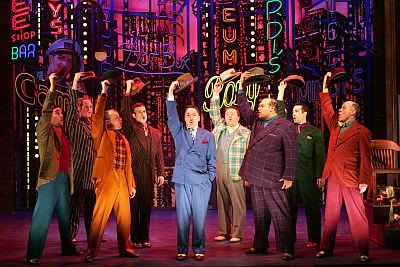 Mark Price (center) and the gamblers.
All photos by Diane Sobolewski


Goodspeed Opera House starts its new season under the guidance of executive director Michael Gennaro with the same style, spirit and professionalism that marked the productions of the Michael Price era. Its first offering is Frank Loesser’s “Guys and Dolls,” one of the most successful of the Broadway musicals of the 1950s. It’s easy to see why the original show ran for 1,200 performances, and why this revival will please audiences throughout its two-month run. The show is well cast, artfully directed by Don Stephenson, and boasts an eye-catching set and period perfect costumes.

Based on several Damon Runyon short stories, with a book by Jo Swerling and Abe Burrows, the musical focuses on the Big Apple’s demi-monde, with a cast of characters that belie their low-life pursuits by speaking in heightened prose that attempts to mimic, they believe, the rather stilted palaver of the upper-class. It opens with a street scene that, though effectively choreographed by Alex Sanchez, seems to be just a bit too over-the-top in terms of entrances, exits and some exaggerated body language. Things quickly settle down as three gamblers, Nicely-Nicely (Scott Cote), Benny (Noah Plomgren) and Rusty (Jordan Grubb) sing of sure things and safe bets based on “reliable” tips from touts. The goings-on are interrupted by a Salvation Army-style band seeking to save any lost souls to be found on . As the band members sing “Follow the Fold,” Sarah Brown (Manna Nichols) hands out pamphlets to no effect, mainly because many of the street’s denizens have bigger things to worry about than their souls: they need to find a venue for their crap game. 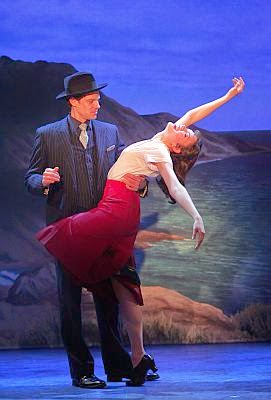 Hosting and backing “The Oldest Established” crap game in is Nathan Detroit (Mark Price), who is currently without the funds to book the Biltmore Garage for the game. has another problem in the curvaceous form of Miss Adelaide (Nancy Anderson), his girl-friend of 14 years who yearns to be married. However, the crap game takes precedence, and the only way he can see clear to getting the funding is to bet the famous gambler and womanizer, Sky Masterson (Tony Roach) that Sky won’t be able to take the prim and proper Sarah on a one-day jaunt to Cuba.

Thus, the scene is set for some memorable numbers, including “I’ll Know,” “Guys and Dolls,” “If I Were a ” and “I’ve Never Been in Love Before.” A possible problem in staging such a well-known musical is that many of the numbers are so tightly attached to and associated with the characters who sing them that even the slightest miscue is noticeable. Fortunately, the miscues in this production are few and far between.

Although Price sometimes borders on eating the scenery, his character’s relationship with the much-put-upon Miss Adelaide is pitch-perfect, and his “Sue Me” a delight.  Nichols’ Sarah is suitably repressed as she disdains Sky’s overtures, so her “If I Were a ,” with her inhibitions loosened by liberal doses of Bacardi, can’t help but bring broad smiles to those watching. Equally effective is in the role of Nicely-Nicely (it doesn’t hurt that Cole bears a passing resemblance to Stubby Kaye, who created the role on Broadway). He, along with Plomgren, sells the “Guys and Dolls” number and leads a rousing “Sit Down You’re Rocking the Boat” near the end of the second act. 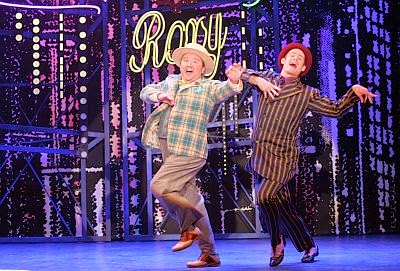 If, at moments, Roach seems somewhat studied and a bit too controlled in the role of Sky – of all the Runyonesque characters he seems the least able to deliver the specialized argot --  he certainly exudes suavity, though there seems to be less than total chemistry between his character and that of Sarah’s. However, as lead male he has little trouble commanding the stage and delivers on “Luck Be a Lady.” 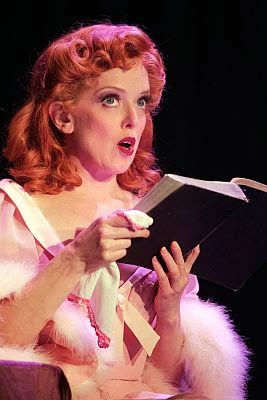 As memorable as all of these characters are, “Guys and Dolls” is really Miss Adelaide’s show, and the actress selected for the role has to be capable of creating a rather mixed aura, a blend of naivete, world-weariness, and sexuality with just a touch of innocence. does all of this and more, creating a Miss Adelaide you wish had been given more scenes. Her “Lament” is priceless (watch her eyes as she attempts to figure out the true meaning of the psycho-babble she is reading – they move to the beat of the orchestration). Her rapid-fire rage at Nathan in “Sue Me” accents the comedy in musical comedy, and she is the energizing force in her character’s duet with Sarah, “Marry the Man Today.” Her performance will be the major factor in generating positive word-of-mouth about the production.

It’s good to know that Goodspeed remains on target. “Guys and Dolls” will please multiple generations: those familiar with the show and the era it depicts and those new to musical comedy. It’s bright, well-paced, and, as is true of most Goodspeed productions, exuberant. It’s a cliché, but you will leave the theater humming a favorite tune, and on the drive home consider going back for a second dose, perhaps inviting a friend with whom you’d like to share two hours of the type of escape for which American musical theater is justly famous.