A Tangled Tango of Relationships 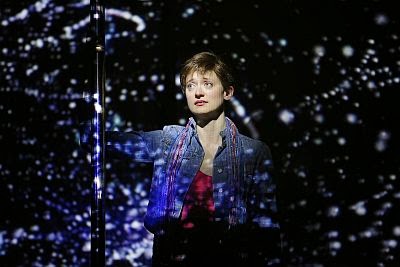 Laurel Casillo in Elevada.
All photos by Carol Rosegg

If you glance through the program for “Elevada,” a new play by Sheila Callaghan that is enjoying its premiere at the Yale Repertory Theatre, you might think you are in for an excursion into 21st-century urban techno-realism, or perhaps a ponderous, solipsistic, pseudo-agonizing reflection on the world of electronic alienation and self-absorbed slaves to the Internet. Then again, you might be worried that the evening will turn out to be an exercise in mixed-metaphor, sophomoric prose, for the program suggests that “Elevada makes the case for leaping, while refusing to assert that the world promises a landing spot any more comfortable outside the frying pan.” Fortunately, the program’s puffery and rush-gush, self-important prose in no way captures what is, regardless of the production’s “Oh-so-now” trappings, an old-fashioned boy-meets-girl love story, and a delightful and, at moments, quite touching one at that. 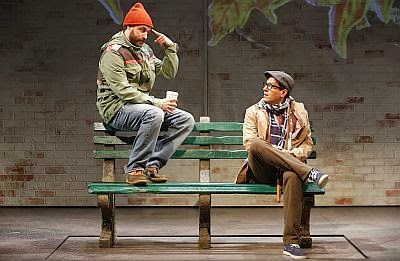 We start with a blind date between Khalil (Alfredo Narcisco) and Ramona (Laurel Casillo), set up on-line (of course) by Khalil’s roommate, Owen (Greg Keller), a rehab veteran who’s sworn off drugs but clings to alcohol. Khalil’s current occupation (for which he is not paid) is to observe activity on various social web sites – the ebb and flow of “communication” -- so he can advise corporations about community-building. In person, Khalil is, as would be expected, socially inept. Thus, he is almost overwhelmed by the effervescent Ramona, a young lady who cannot help but send out sparks of delight at the simple possibility of ordering pheasant for dinner. Yet Ramona is also flawed – she is being treated for cancer, a dark angel that hovers beneath her bubbly consciousness and suggests that her worth can only be found in her illness. She is also being mothered by her sister, June (Keira Naughton), a shark-in-the-water real estate agent who’s not above “stalking” to secure relational happiness.

Yes, there’s a techno-coating to all of this, with cell phones beeping and the ubiquitous lap-tops, and a rather unbelievable business ploy by Kahlill to sell “himself” – that is, his very being (Mephistophelean overtones here) – to the highest corporate bidder (what a corporation might want to do with his persona is never made clear), but all of this is, in the long run, beside the point, for Callaghan, for all of her efforts to make her play au courant, is essentially a romantic at heart, and shriven of the techno-overlay, this is a play about four lonely, semi-dysfunctional people who may just find a modicum of happiness if they simply, though ineptly, reach out to each other and embrace. 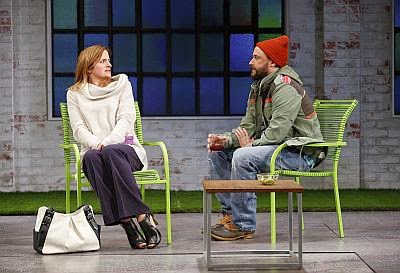 As effectively and, at moments, tenderly directed by Jackson Gay, with efficient, minimalistic scenic designs by Kurtis Boetcher and stunning lighting and projection designs by Tyler Micoleau and Shawn Boyle, “Elevada” overcomes whatever “message” Callaghan had in mind to simply please on a very basic level, and this is primarily due to the wonderful cast, led by the vivacious, engaging Casillo, who gives us a young woman who is both gamine and femme fatale, with a bit of waif thrown in for good measure. She is, quite simply, a joy to watch, whether she is doing a sensuous pole dance, climbing a garden fence, eagerly anticipating that pheasant dinner or simply standing to learn her medical fate. Her performance is quite easily worth the price of a ticket.

Not to be outdone, Naughton gives the audience a superbly up-tight yet needful lady who is all surface-ceramic (a nice bit of costuming by Steven M. Rotramel has Naughton always in heels while Casillo mostly wears flats or is barefoot). Naughton’s character is a brittle beauty teetering on the edge of breaking into pieces that may not be able to be put back together again. Her urban sophistication meets its match when she is confronted by Khalil’s roommate, Owen, a wobbly wordsmith who is well aware of his own failings yet can see truth when it stands before him, even though he may be seeing said truth through eyes slightly blurred, compliments of Stolichnaya. 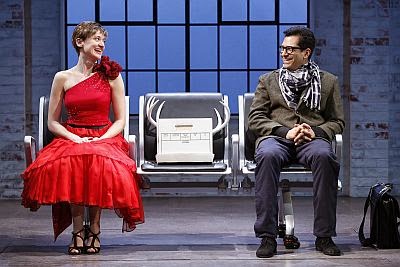 As the computer geek, Narciso must bring to life what is basically a wallpaper character. It’s a difficult job, given his character’s main quality is a desire to be non-existent. While the play’s three other main characters bristle with quirks, Khalil is self-effacing. Narciso manages to give his character a growing presence as, ironically, “Khalil” rushes towards non-existence, subsumed and consumed by the electronic media. Unfortunately, Khalil’s quest for obliteration is the play’s major flaw, for the message here is diffuse and thus unclear. Does the electronic media obliterate our real personalities or merely allow us to take on multiple, faux personalities? Are we all destined to become nothing more than an accumulation of bytes, an assemblage of ones and naughts that float in the electronic ether? The questions posed by the play are vague and the answers ambiguous.

Fortunately, the techno-terror frame really doesn’t impede enjoyment of the time-tested formula of boy meets girl, boy loses girl, boy finds girl again as they come together to dance through life. The inherent irony in this play is that though it attempts to deal with the digital effacement of personality, the vibrant personalities on stage put the lie to the premise. The performances that Casillo, Narciso, Naughton and Keller deliver could never be digitized, and thank God for that.