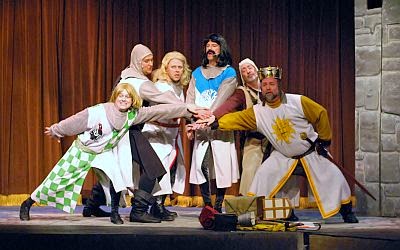 Arthur and the knights.
All photos by Susan Choquette


Tucked up in the rolling hills of central is the Broad Brook Opera House, home since 2003 to The Opera House Players, a group originally formed as the St. Martha Players in 1968. The group presents four musicals a year in space that was built in 1892 by the Broad Brook Woolen Company and over the years has housed an ice cream parlor and an insurance company. Currently running in the wooden-beamed theater is “Monty Python’s Spamalot,” based on the film “Monty Python and the Holy Grail.” This delightful, slightly irreverent musical, with book and lyrics by Eric Idle and music by John Du Prez and Eric Idle, is a witty send-up of the King Arthur legend and, at the same time, many of the traditions of the Broadway musical.

Under the capable direction of Sharon FitzHenry, the cast of 15 talented actors has one hell of a time camping it up, much to the delight of the audience. The mood for the evening is set when the Historian (Ryan Bird) provides a pretentious lecture on the history of the period in . Confusion immediately reigns, for the opening number, “Fisch Schlapping Song,” is set in . This is only the first of many misconstrued remarks that fuels much of the comedy. 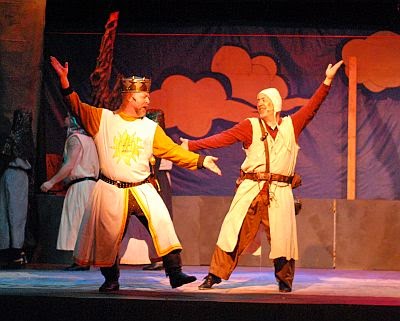 With a limited set – several rather stunted “trees,” two castle towers, some sliding curtains and several painted scrims – the cast is able to vividly create multiple, believable scenes in Arthur’s bumbling quest for the Holy Grail. “Spamalot” is basically farce, and for farce to work the cast can’t play it farcically – sounds like a contradiction, but for everything to work the characters must give the impression that what is going on up on the stage is the stuff of high drama, and this they do admirably.

Gene Choquette as King Arthur is capable of being commanding and befuddled at the same time, because it ain’t easy being king, especially when your subjects didn’t vote for you and don’t even realize they live in a kingdom. He takes comfort in his faithful servant Patsy (Luis J. Manzi), who carries their equipment and supplies the “clip-clop” for their “horses,” said sound leading to a delightful argument early in the first act between the king and several yeomen about the source of the coconut shells Patsy uses. 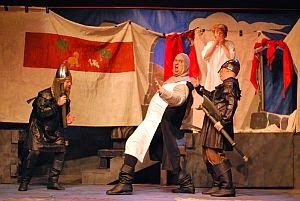 Lancelot (Michael King) about to save a "maiden"

Scouring the countryside for able men to become the knights that will sit “at a very large round table,” Arthur recruits Dennis (Tim Reilly), a semi-cretin who, with the help of the Lady of the Lake (Erica Romeo), morphs into Sir Galahad, with the cheering support of the Laker Girls (Amy Rucci, Kaytlyn Vandeloecht, Liz Clayton, Mallory Wray and Aileen Merino Terzi). Also called to the king’s banner are Sir Belvedere (Rick Fountain), the overly-aggressive Sir Lancelot (Michael King) and the slightly-less-than-aggressive Sir Robin (Randy Davidson). Beyond serving as Arthur’s stalwart (?) knights, the four actors also ably play multiple roles.

The musical is basically a series of set-pieces framed by the quest story, with each piece offering its own very distinctive, and by now very well known, musical number. The problem with taking on such a production (those involved had to believe that much of the audience would be familiar with the original film and with the subsequent Broadway production) is that expectations are high. By and large, the expectations are met. 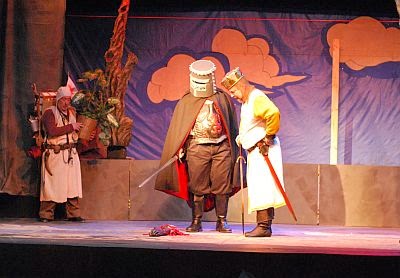 Those familiar with the musical know full well that one of the central roles is that of the Lady of the . She has several key numbers – among them a duet with Arthur (“The Song That Goes Like This”), and the show-stopping “The Diva’s Lament.” Happy to say that Romeo pulls both off with great aplomb. She’s a perfect Lady – arch, sarcastic and robust, with a true diva’s voice.

In fact, all of the lead roles are played with a great deal of sophistication and professionalism. They dance and sing, often at the same time. The “Knights of the Round Table,” is rousing, “Always Look on the Bright Side of Life,” an eye- and ear-catching opening to the second act, and “Brave Sir Robin” slyly humorous.

There are two numbers, however, that stand out. The first is Sir Robin’s “You Won’t Succeed on Broadway.” Here Davidson truly shines – he’s entertaining from beginning to end. The second is the flamboyant “His Name is Lancelot,” when said knight slowly comes out of the closet to a disco beat. King’s body language here is priceless as he allows his character to slowly move to the beat. The final shining moment ostensibly belongs to Arthur who, late in the second act, laments that “I’m All Alone,” but the number wouldn’t work without Manzi’s subtle reactions to the fact that his very existence is being disregarded. To Choquette’s credit, he creates an obliviousness to the obvious that makes Manzi’s responses even funnier.

As good as these musical numbers are, the show would not work if the cast wasn’t able to capture the unique Pythonesque nature of the extended dialogue, which offers absurdity in the form of rational conversation. Credit to director FitzHenry for imbuing the cast with the sense that the silliness must be delivered in all seriousness. The aforementioned argument about the coconuts is one example; others include Arthur’s argument with Dennis and his mother about the proper type of government for the realm, the confrontation with the Knights who say Ni and the deliriously silly argument before the castle walls of a French nobleman. Add to all of this the Trojan rabbit, an evil, bloodthirsty rabbit and the Holy Hand Grenade of Antioch and you’ve got a send-up of multiple myths, religion and more musicals than you can shake a lance at.

Yes, there are some minor problems, among them lighting that often throws some of the actors into shadow (a problem that could have been solved by several follow spots), a sound system that sometimes suffers from feedback, and some (occasional) rather discordant notes emanating from the quartet of accompanying musicians, but these minor glitches do not take away from the overall enjoyment of the evening. It may take a bit of travel time for many theatergoers to make it up to Broad Brook, but they will find the quest well worth the effort.

By the way -- a nice touch -- the actors line up outside the theater to greet audience members as they depart.