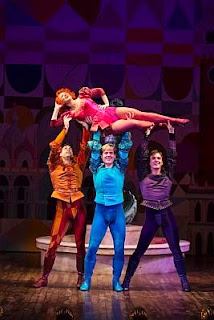 
After the success of “A Gentleman’s Guide…,” first in and then on Broadway, one might think that Hartford Stage’s artistic director Darko Tresnjak – given the “That’s great, but what have you done for me today?” syndrome -- might take a musical comedy sabbatical. But no, Tresnjak has opted, in association with The Old Globe, to resurrect and re-stage Cole Porter’s 1948 come-back smash, “Kiss Me, Kate,” and he has done so with style, flair and inventiveness, albeit with major assistance from choreographer Peggy Hickey.

After a string of flops in the late 30s and early 40s, Porter was thought by many to be washed up, but in response to Rodgers and Hammerstein’s “Oklahoma” (1943) and other musicals with integrated books (that is, those with songs that meshed with and advanced the musical’s plot), Porter hit on the idea of creating a musical about a group of actors preparing to present Shakespeare’s “Taming of the Shrew.” The result was “Kiss Me, Kate,” with a book by Bella and Samuel Spewack, which in 1949 won the first Tony award presented for Best Musical. 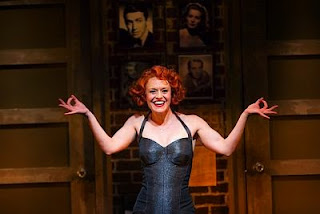 The show-within-a-show format opens with “Taming’s” cast and crew gathering backstage to sing one of show businesses most famous paeans: “Another Op’nin’, Another Show.” The number, as staged by Tresnjak, begins almost as a dirge and then builds into the anthem that everyone is familiar with, accented by Hickey’s inventive, propulsive choreography. It’s in this first number that the show’s physicality is established, a physicality that is personified by Megan Sikora, who plays the actress Lois Lane who, in turn, plays the shrew’s sister, Bianca, in “Taming.” Over the course of the evening, Lane will not only deliver on “Tom Dick and Harry” and “Always True to You in My Fashion,” but she will be flipped, spun, whirled and cart-wheeled from one pair of strong arms to another so that at moments you worry for her safety. It’s a bravura performance, one that must find her drained after the curtain. 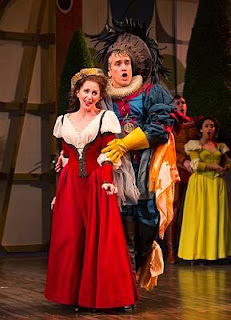 “Taming” is being produced and directed by the egotistical Fred Graham (the strong-voiced Mike McGowan), who also plays Petruchio, one of the leads. Opposite him, as Kate (Anastasia Barzee – a veteran of Broadway’s “Urinetown” and “Jekyll & Hyde”) is his ex-wife, Lilli Vanessi, now a movie star and a bit of a shrew herself. The couple, after some verbal sparring, finds that they still have feelings for each other, first by reminiscing about a second-rate show they were in and singing “Wundebar,” one of the show’s numbers. Lilli then receives flowers – her wedding bouquet – from Mike, and realizes that she is still “So In Love.” Alas, the flowers have been mis-delivered – Mike meant them for Lois, whom he is currently romancing. The card accompanying the flowers is initially misplaced, but just before the opening of “Taming” it is found and Lilli vows to read it later. She will do so during the performance, which will set off pyrotechnics that will propel the show through the rest of the first act and well into the second. 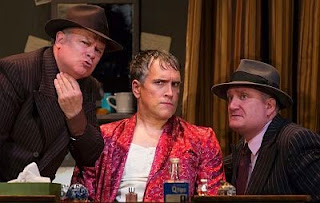 As a delightful sub-plot, Lois’s boyfriend, Bill (Tyler Hanes – the deft lead in the “Bianca” number), an inveterate gambler, has signed Mike’s name to a $10,000 IOU. Just before the curtain is to go up on “Taming,” two thugs (Brendan Averett and Joel Blum) arrive to collect. Mike protests that he has no memory of signing the chit, but the two aren’t buying – they will hang around until he “remembers” and pays up. Eventually, these two star-struck mugs will become involved in “Taming,” and will, in the scene-in-one number “Brush Up Your Shakespeare,” basically stop the show. They will also, during a delightful rendition of “I Am Ashamed…,” shoot down an offending songbird.

As the leads, Barzee and McGowan (who has been given a rather interesting hairdo – think Caesar fresh from the baths) initially seem to be riding the surfaces of their characters. This awareness of playing a role soon dissipates when Lilli/Kate reads the note. After that, the sparks fly and any reservations one might have had are easily set aside. Barzee blossoms with “I Hate Men,” as her great sense of comic timing comes to the fore, and as she becomes more brash and brazen, McGowan responds. He gives as good as he gets and it becomes what it should be, a lot of rollicking fun. 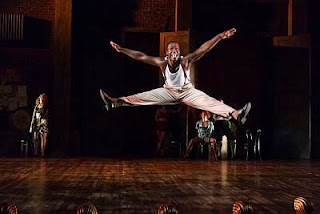 Of special note is the second act’s opening number, “Too Darn Hot.” Those familiar with only the movie version of the musical will remember that in the film this number was basically a showpiece for Ann Miller’s substantial talents. However, this is the opening number of the second act, and as such, it calls for a “cast call,” which Tresnjak and Hickey deliver, featuring the manifest talents of James T. Lane, who plays Paul and the Innkeeper. It’s an engaging ensemble number driven by Lane’s tapping feet and it does what a second-act opening number is supposed to do: it wakes up the audience and brings those fresh from the rest rooms back into the world of the show.

With great costumes by Fabio Toblini and a flexible set (Alexander Dodge) that seamlessly shifts from “backstage” and dressing rooms to Padua, this two-hour romp can’t help but please. The performances are consistently excellent, the energy level is high, and the staging and choreography both intelligent and captivating.