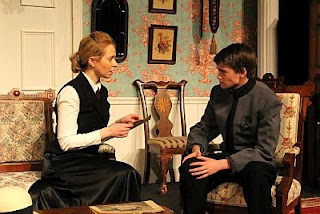 
How do you dramatize a court case without ever showing a courtroom scene? Bit of a problem, eh? Well, that’s the challenge playwright Terence Rattigan took on with his play, “The Winslow Boy,” which premiered in 1946. Instead of courtroom dramatics (which were added in the 1948 film of the play), Rattigan chose to focus on what might be called the home front, that is, the drawing room of the Winslow family, a relatively prosperous Edwardian family whose younger son, Ronnie, has just been expelled from Osborn Naval College for supposedly stealing a five-shilling postal order (think Western Union wire transfer). The father’s decision to press for justice and vindication for his son, which will turn into a two-year ordeal, and the impact this quest has on the Winslow family, is what is currently being boarded at Square One Theatre Company in Stratford, and the result is, though at moments interesting, less than gripping.

As directed by Tom Holehan, Square One’s artistic director, the production often seems to be running on low-wattage. This lack of sizzle may have several causes, the first being the subject matter itself. The audience is many generations removed from this family, and the social mores and strictures of Edwardian England it has to confront are, if not totally alien, in need of greater explication than Rattigan provides – one gets the feeling the dramatist assumed knowledge that, seven decades later, is simply no longer there.

Thus, though Ronnie (Sam Noccioli) has been shamed, the social gravity of this ignominy is not immediately apparent, and its importance to the family’s honor and standing, which impels his father, Arthur (Bruce Murray) to seek formal redress, seems slight. This mountain-out-of-a-molehill concern is addressed by Arthur’s wife, Grace (Ann Kinner), in one of the play’s most moving scenes, but it comes too late to frame the primary action and provide dramatic tension. 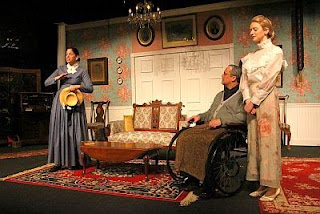 There are other elements whose gravity and import suffer from the seven-decade remove: the somewhat idle lifestyle of the family’s older son, Dickie (Ryan Hendrickson), a lackadaisical Oxford student, the nascent feminism of the family’s daughter, Catherine (Tess Brown), and the formal attitude of her suitor, John (Jim Buffone), concerned as he is about “what people (especially his father) will say” about the family’s challenge to the government, and the family’s relationship to their maid, Violet (Lucy Babbitt).

The inherent drama in the play is that this family is under a siege that is, to a certain extent, self-created, but the stakes simply never seem that high or compelling. This is also, in part, due to the energy projected by the cast. Although there are moments in the play that command attention, as the lady who accompanied me pointed out during intermission, the actors often seem to be holding back (save for Babbitt), partly a function of a sound system that, at times, makes it difficult to hear what’s being said, and partly due to the actors’ lack of projection – seldom does anyone seem to be playing to the balcony, perhaps because too much thought is being given by the actors to maintaining the British accents that vary from stilted to all-to-plummy. 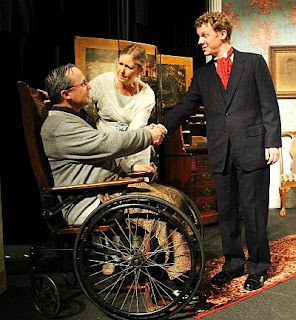 This “I’m aware I’m playing someone British” is most apparent in Joseph Maker’s take on Sir Robert Morton, the renowned barrister who takes on Ronnie’s case. Although quite effective in the “interrogation” scene (the closest the play comes to courtroom drama), he has a bit of difficulty pulling off the “to the manner born” attitude inherent in his character. Often, he just seems smug.

Perhaps these criticisms seem a bit heavy-handed – after all, this is community theater – but Holehan and company have, over the group’s 25-year history, shown themselves again and again to be capable of producing enthralling theater -- high standards that, in this case, are not met…and yet, you sense that if the actors had been urged to “go for it,” the evening would have been quite a different experience. ’s take on the father could have been more intense, and over the evening one got the sense that Brown was eager to give Catherine a more vivid presence.

Part of the tension that should exist in this play is the human passions that boil beneath the façade of Edwardian propriety. That passion gives meaning to Arthur’s decision to seek redress, Grace’s devotion to her family, Catherine’s commitment to female equality, and Morton’s devotion to seeking justice (and perhaps winning Catherine’s hand). To be effective, however, said passions cannot be implied, they must be dramatized, if not in words then in all of the other ways that actors have to create and project emotion. Perhaps, a few simple words to the cast might transform the production: “Yes, you’re British, but you’re also people.”