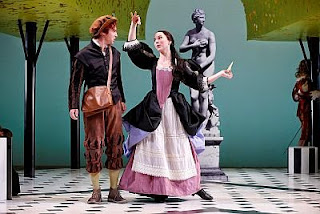 Rusty Ross and Rebekah Brockman.
All photos by Carol Rosegg


If you have the time, and don’t mind rhyme, that is, to verse you’re not averse, “The Liar” ‘tis, I’m sure you’ll find, a bit of show biz that’s rather fine.

The opening production of Westport Playhouse’s 86th season is an adaptation of Corneille’s comedy by David Ives, the author of “Lives of the Saints” and “Venus in Fur.” It’s a smart selection, for it is light, frolicsome and, as deftly directed by Penny Metropulos, a fast-moving romp that blends 17th-century French theater motifs with modern sensibilities, and it doesn’t hurt that the cast is, without exception, not only extremely talented but totally “into” the spirit of the evening.

As the play’s title suggests, the focus of the goings-on is an habitual liar by the name of Dorante (Aaron Krohn), recently arrived in – or, has he been there for a year – or, has he been off fighting the Germans? Wherever he’s been, he is quickly accosted by Cliton (Rusty Ross), who urges the gentleman to hire him as his valet. The deal is made, and Dorante soon relates to Cliton his desire to find a maid to woo and win. No sooner said than Lucrece (Monique Barbee), Clarice (Kate MacCluggage) and Isabelle (Rebekah Brockman) appear on the scene. Dorante immediately falls in love with Clarice, but he is misinformed by Cliton that the lady’s name is Lucrece. Confusion immediately sets in, added to by the fact that Isabelle immediately falls for Cliton, but you see, while Isabelle is somewhat lusty, her twin sister Sabine (also played by Brockman) is somewhat stern and straight-laced. You sense the complications that will arise here. 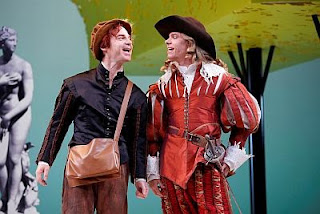 To add to the confusion, Clarice has been engaged to Alcippe (Philippe Bowgen) for two years, and Alcippe happens to be Dorante’s dear friend. Oh, dear. More complications. Then there is Geronte (Brian Reddy), Dorante’s father, who desperately wishes his son to marry and father a child, and Alcippe’s confidante, Philiste (Jay Russell), who is secretly in love with Sabine. Egads and zounds! Even more complications.

Yes, the plot goes ‘round and ‘round like a whirligig, but you won’t need to overly worry about which way the wind is blowing, because the plot twists are secondary to the magnificent, multiple lies that Dorante weaves over the course of the evening, each one more fabulous than the last, and each adding impetus to the imbroglio. 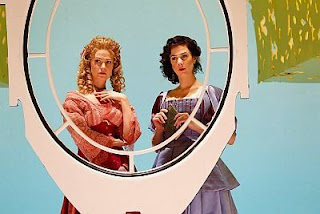 Krohn is superb as the mendacious Dorante. Yes, his character is a liar, but there’s a certain honesty to his marvelous confabulations that he conjures with a great deal of brio. The is his description of how he was forced to marry, an extended monologue that is an express train of storytelling. All you can do is watch in awe as he grasps at straws and somehow manages to construct a cathedral out of them. 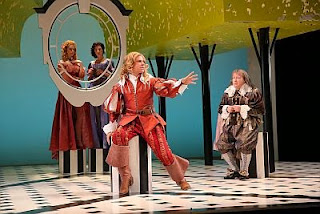 He is ably supported by Ross, whose character is the direct opposite of Dorante’s – Cliton cannot tell a lie. Ross plays the jester/dogsbody to a fault, making biting comments as appropriate while all the while in awe of his master’s audacity. As the two ladies being wooed, MacCluggage and Barbee work their banter well, with MacCluggage giving Clarice a suitable archness that plays off Barbee’s somewhat wistful and naïve Lucrece.

The supporting cast is equally adept. Brockman plays both of her roles to perfection, and has one of the best (theatrical) lines of the show – “I almost didn’t make it.” – at the play’s conclusion. As Alcippe, Bowgen has obviously looked up the word “popinjay” and has taken the definition to heart. His character is all pomposity and puffery, and he delights in another of the play’s set-pieces, the “finger” sword fight with Dorante. 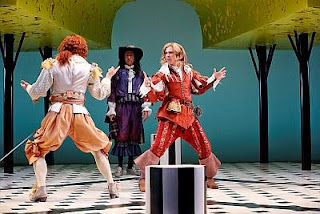 Reddy and Russell are equally comfortable in their characters, with Reddy giving us just a hint of Polonius and Russell a tinge of Malvolio (yes, Ives, while adapting Corneille, doesn’t forget the Bard). 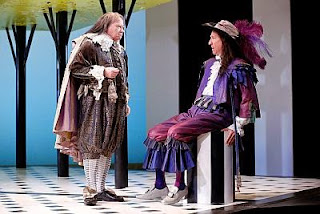 Since this is an adaptation that blends conventions separated by almost five centuries, the set by Kristen Robinson is effectively minimalistic, consisting basically of four overarching “trees” under which chairs, several black and white barrels and a garden gate are maneuvered by the cast to suggest setting. It falls to costume designer Jessica Ford to establish the 17th-century feel of the production, and this she does with a great deal of style and invention.

All in all, “The Liar” is a classy, inventive, verbally entrancing hoot of a play. Yes, some of the rhyming may be a bit strained, but that just adds to the enjoyment. You will feel a smile blossom as you watch the play’s opening moments, and as the evening progresses the smile grows into a perpetual grin of delight and satisfaction.