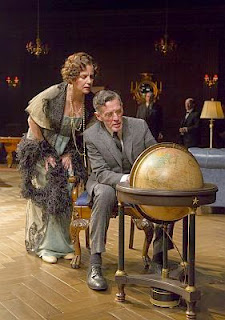 
Conflict. It’s the essence of drama. No conflict -- no drama. There simply has to be something up for grabs, and the degree and intensity of the grabbing quite often dictates the emotional involvement of the audience. So, how involved is the audience in “The Second Mrs. Wilson,” a new play by Joe DiPietro in its world premiere at Long Wharf Theatre? In one person’s opinion, less than it should be.

The premise is solid: President Woodrow Wilson (John Glover), a widower, is, circa 1915, trying to keep the out of the conflagration that is consuming , but the war mongers are calling him coward and urging him to send “our boys” overseas to pay back the Huns for all of their dastardly doings on the high seas. As agonizes over his options, seeking advice from his long-time friend, Colonel Edward House (Harry Groener), a woman comes into his life – Edith Bolling Galt (Margaret Colin), a direct descendant of Pocahontas. The widow of Norman Galt, a jeweler, she is introduced to the president by his cousin. The president is smitten and a scant nine months later Edith and Woodrow are married.

is eventually drawn into World War I in 1917 and, at its conclusion, is greeted by many in as a savior. Driven by a quasi-messianic belief in the possibility of world peace, Wilson presses for the formation of the League of Nations as part of the Treaty of Versailles, but back home there are those, chief among them Senator Henry Cabot Lodge (Nick Wyman), who feel that the League infringes on the country’s ability to chart its own course, especially when and if it will ever again go to war. 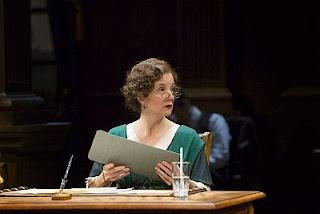 The travel and strain take their toll on Wilson, who suffers a stroke in 1919. Given Wilson’s inability to function fully on a daily basis, Edith, believing she understands better than anyone else Wilson’s dreams and hopes,  takes over many of the president’s administrative duties, much to the consternation and frustration of Vice President Thomas Marshall (Steve Routman) and Secretary Joe Tumulty (Fred Appelgate). The Senate rejects the treaty, shattering ’s dream.

This is heady stuff – the stuff of history and high drama, but the tensions, the stakes – the conflict – simply aren’t palpably there in the play. Yes, we have all of the “facts,” but the characters seldom come to life, turning the play into a dramatized history lesson.

What does work is the human relationship between Woodrow and Edith – his giddy delight in her and her growing devotion and dedication to him. In these intimate scenes, Glover and Colin bring their characters out of the dusty history books and show us a man and a woman who find, somewhat late in life, what they have been looking for. Colin is also extremely engaging in her extended scene with Groener, in which she puts Colonel House in his place, using sarcasm and innuendo. 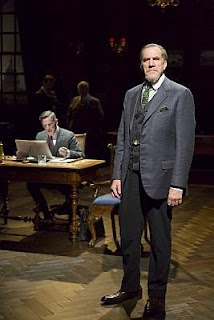 Alas, these sparkling moments fade as the “facts” overwhelm the essence of drama. The problem is that DiPietro, who penned “” and “I Love You, You’re Perfect, Now Change,” seems to be handcuffed by history. Anyone familiar with this time period in knows the story he is telling, although argument continues over the extent of Edith’s influence and her true intentions. DiPietro seems to want to “get it right,” which is good if you are writing a history book but may not serve if you are writing a drama. Lord knows, other playwrights have played fast and loose with “the facts” to serve the god (or goddess) of drama. Think of Arthur Miller’s “The Crucible” or Jerome Lawrence and Robert Lee’s “Inherit the Wind.” Historians might carp, as they did and continue to do about these plays, but playwrights are charged with creating a different kind of “truth.”

One of the truths DiPietro seems to have been going for is the misogyny of the era. The play is set in the White House, but before the curtain the male characters, save for , have gathered to play pool in what appears to be an exclusive men’s club. The message is clear – this is a man’s world, complete with liquor and cigars. That this is also the White House, where Edith will eventually hold sway, visually presents what might have been DiPietro’s focus, but the focus is diffuse, even though the males “lurk” in the background throughout most of the play, lounging and watching. Is the play about the political in-fighting that led to the rejection of the Treaty of Versailles, is it about Wilson’s rigid Presbyterian moralism that perhaps stymied his attempt to create a just and equitable peace, or is it about Edith and what angels or devils compelled her to do what she did, or is it about the mind-set that eventually would be termed the “glass ceiling,” or is it about love and devotion? DiPietro touches on all of these themes, but without focus the inherent drama of each is underdeveloped. A lot happens in the two hours, but you come away not really sure about what, exactly, has happened or what you were supposed to care about.