Are you a virgin?

In the parlance of the Rocky Horror Show, that's someone who has not seen the show, or the movie. I lost my virginity about 15 years ago down in New Jersey when I attended a midnight screening of the film. It was, to say the least, an experience or, given I'm a child of the 60's, a "happening." 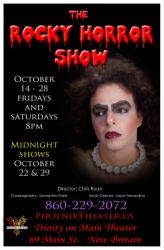 For all of you virgins out there, you have the opportunity to correct this embarrassing situation by trucking on up to the Phoenix Theater Company in New Britain, where the Rocky Horrow Show is playing on weekends thru Oct. 29. Dress appropriately (I went as a monk!) in clothes you won't mind getting a bit soiled -- or wet. The Company will be handing out what they call "participation bags" (Don't ask -- Just go!)

What's it about? Well, there's this young couple and these space aliens, a castle and...oh, the hell with it. Just go...and enjoy. The show is being presented at Trinity-on-Main, 69 Main St., in New Britain. For tickets call 860-229-2072 or go to http://www.trinityonmain.org/

The Ivoryton Playhouse (celebrating its 100th anniversary) is offering The Woman in Black, by Stephen Mallatratt, based on the Susan Hill Novel, as its "treat" for Halloween. 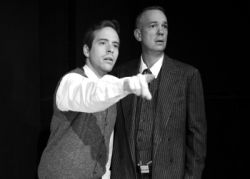 Ian Lowe and Steve L. Barron - Photo by Anne Hudson
This is an old-fashioned ghost story (and a big hit in London -- it's been running for 23 years in the West End). Of course, it's set on an English moor, where Arthur Kripps, a young solicitor, arrives to settle an estate -- simple enough, but not quite. Oh, the horrors that the past enshrouds and the evil lurking in the most innocent of objects.

It's all here in Spencers Theatre of Illusion, which will be presented at Fairfield Univeristy's Quick Center on Sunday, Oct. 30. 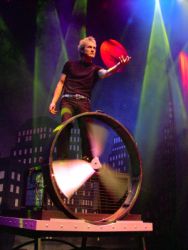 The Spencers (Kevin and Cindy) are a husband and wife team who put on a show with a lot of elaborate stage illusions and audience particpation. Are they good? Well, they've been named "Performing Arts Entertainers of the Year" for six consecutive years and were recently named "International Magicians of the Year." Sounds good to me. The Quick Center's press release offers this: "They continue to redefine 'magic' for a new generation, delivering drama, spectacle, interaction, danger and personality with each unforgettable performance."

A History of Theater in Fairfield

The Fairfield Museum and Historical Center has a new exhibit: BRAVO! A History of Theater in Fairfield County.

The installation includes some of Katherine Hepburn's old stage costumes, and a lot more. For more information go to www.fairfieldhistory.org/exhibitions/

Also, as part of the festival, Falcon Repertory Company, Inc., is co-producing a live exhibit and performance for the museum. Thinking Outside the Box is a festival of ten-minute plays that features local actors, directors and playwights. Rehearsals, which will take place from November through February, are open to the public, with performances scheduled for the beginning of March. For more information go to http://www.falconrep.com/.
Posted by Geary Danihy at 5:09 PM