"In the Heights" and Westport Country Playhouse

Westport Country Playhouse is well into its 2011 season, but plans are already in place for next year’s productions, and it looks like a very interesting season. The Playhouse is leading off with Sondheim’s “Into the Woods” – one of my favorites -- to be directed by Mark Lamos, the venue’s artistic director. He’ll also be directing the world-premiere comedy, “Harbor,” by Chad Beguelin, and the Playhouse’s associate artistic director, David Kennedy, will helm the staging of Moliere’s “Tartuffe.”
Outside directing talent will fill out the bill. First, Nicholas Martin, who has directed many Broadway and Playhouse productions, will guide the staging of “The Year of Magical Thinking,” featuring Maureen Anderman. The play’s based on Joan Didion’s award-winning book. The Playhouse will also be offering Lorraine Hansberry’s “A Raisin in the Sun,” to be directed by Phylicia Rashad. 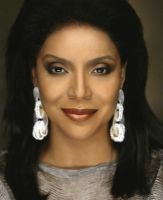 Phylicia Rashad
She won the Drama Desk and Tony Award for Best Actress for her performance as Lena Younger in the Broaddway production of the Hansberry play, and also directed it for the Ebony Repertory Theatre.
Posted by Geary Danihy at 3:48 PM