Catharsis Interruptus
If Aristotle had been among the members of the opening night audience for The Yale Repertory Theatre’s world premiere of Amy Herzog’s “,” he probably would have left the theater shaking his head and mumbling, “Read my Poetics, damnit!” That’s because this by and large artfully written and well-produced domestic tragedy, commissioned by the Rep, makes you care about the lead characters and then, instead of opting for some form of resolution that would allow for release of pent emotions, leaves you hanging…in French, no less.
This is a shame, for the first eighty or so minutes of this one-act play directed by Anne Kaufman are humorous, disturbing and at times riveting, as the married life of Zack (Greg Keller) and Abby (Maria Dizzia) is placed under a microscope and dissected. 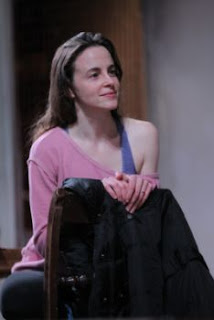 The young American couple is living in a section of called (not much is made of this – they could just as easily be living in ), renting a three-room apartment owned by Alioune (Gilbert Qwuor), originally from , and Amina (Pascale Armand). Abby is a frustrated actress currently teaching a yoga class to students who don’t show up and Zack is a doctor working for an unnamed organization seeking to mitigate AIDS in children. But all is not as it seems, as is evident from Herzog’s point of attack, which has Abby arriving home early to find Zack, who should be at work, satisfying himself by watching pornography. 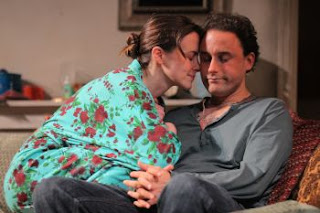 Maria Dizzia as Abby and Greg Keller as Zack
As this exercise in domestic dysfunction proceeds, we come to understand that Abby is haunted by her parental past, and Dizzia’s portrayal of this young woman on the brink of a nervous breakdown is pitch-perfect, with body language telegraphing abrupt shifts of mood and dialogue delivery ranging from clipped sarcasm to controlled hysteria. As a balance to Dizzia’s mercurial performance, Keller gives us a husband fighting to maintain some equilibrium in his storm-tossed marriage.
Yet there are dragons hiding in the shadows, and the play’s emotional drive inevitably leads to their revelation, and this is where things start to fall apart, for there’s a certain hollowness at the core of the drama. For all the emotional sturm und drang, when all is revealed it seems both beside the point and just a tad unbelievable, as in, you mean to say you’ve been married to him for this long and never realized…?
Then there’s the inexplicable denouement – a dramatically false exit followed by the landlords cleaning up the apartment and speaking to each other in French. It’s a picture-perfect example of anti-climax, leaving the audience to stew in its own emotional juices.
“” satisfies on a number of levels but the sum experience is much like biting into a chocolate-covered cherry only to find the center holds nothing but air.
“” runs through Saturday, Nov. 12. For tickets or more information call 203-432-1234 or go to http://www.yalerep.org/.


Make sure to check out all of the reviews, theater news, casting calls, theater listings and general information about Theater at http://www.ctcritics.org/

For film reviews, go to http://susangranger.com/
Posted by Geary Danihy at 8:58 AM