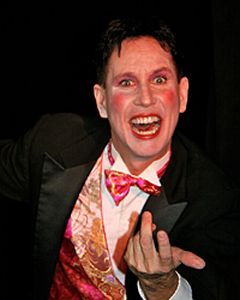 Eric Scott Kincaid as The Emcee. Photo by Jim Schilling
When a Broadway musical gets transcribed to the big screen it inevitably gets “opened up,” that is, scenes with locations left to a theater audience’s imagination are shot on location; a trip merely alluded to in dialogue is filmed with the breeze ruffling the primary actors’ well-coifed hair. Consider “Cabaret,” the Kander and Ebb musical made into a musical in 1972 – what was left in the shadows on Broadway was up there on the big screen for all to see.
However, when a venue such as MTC Mainstage decides to stage “Cabaret,” given the physical layout of the 45-seat theater, down-sizing is in order, but that may not be a bad thing. As a matter of fact, it may allow the essence of the musical to become manifest, shriven of unessential “production values.”
Kevin Connors, MTC’s co-founder and executive artistic director, recently spoke about the staging of this classic musical, which opens Friday, Nov. 4, at MTC. He first commented on the decision to produce a “big” musical, such as “Cabaret” at MTC, known more for its presentation of two- or three-character “chamber” musicals. 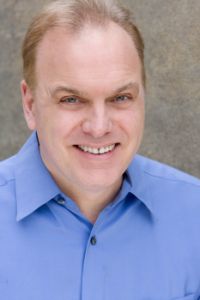 Kevin Connors
“This is our 25th season,” Connors said, “and we wanted to do something ambitious, something outside the box for us. We wanted to take a ‘traditional’ musical and come at it in a different way, give it our own approach. By the very nature of our stage, everything we do here is very intimate.”
Take away all of the floss and fluff, Connors suggested, and the musical is really about seven characters, with primary focus on the somewhat fragile British songbird, Sally Bowles, and the naïve American, Cliff Bradshaw, who fall in love, and Fraulein Schneider, who runs a boarding house, and one of her tenants, Herr Schultz, a Jewish fruit-shop owner…all set against the rise of the Nazi party.
“This all takes place in the early 1930s,” Connors said, “when was going through a huge economic crisis -- not unlike what is going on now. There seemed to be a polarization of the very wealthy and the very poor. The middle class was disappearing. There was high unemployment; people were losing their jobs. On one end was the Communist party, with its own answer about how to fix this, and on the other end of the spectrum was the Nazi party, with its own answer. All of this is kind of bubbling beneath the surface, with the German people trying to maintain some semblance of everyday life.”
The proximity of the audience to the actors (eight, in this case) at MTC, Connors suggested, allows his production to really focuses on the conundrums the musical’s characters must deal with. What do they need to do to survive, what should they do in the face of incipient oppression and racism, what will they allow other people to do to keep German society from shattering? What are they willing to do to keep their hearts and somewhat shoddy, shaken souls intact? 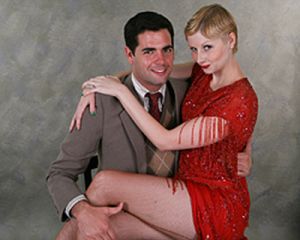 “The whole convention of ‘Cabaret,’” Connors said, “is that it takes place in a club. Even in a big production, I never got the sense that the club was the size of, say, the Lido de Paris or the Casino de Paris, one of those big -like showrooms. It’s a club where people go to hang out and have a good time, and the relationships between these people are intimate, which to me says ‘smaller.’ It’s a place where people go to have a good time and leave their cares at the door, as the Emcee suggests in the opening number.”
Mention of the Emcee led to a discussion of character interpretation. Connors said that the Emcee in this production, played by Eric Scott Kincaid, is a bit closer to Joel Gray’s interpretation of the character than that of Alan Cunning, who appeared in the 1998 revival.
“I felt that the revival went in an uber-sexual direction,” Connors said. “They really took that element and pushed it, which was great, it really worked for that production. But given the intimacy of our theater I felt that our audience would be just a bit too close to make that work, so our Emcee has a little more ‘twinkle-in-the-eye’ sexuality.”
Given that most of MTC’s audience members will be familiar with the show, either in its stage or film version, Connors has also given some thought to audience expectations. He noted that everyone “thinks they know what Cabaret is about,” and focused on the musical’s signature song, the one that urges people to “Come to the cabaret,” to make his point.
“Everyone remembers that number, especially Liza Minnelli’s version, as such a ‘feel good’ number, but that is not what that number is about at all. It’s really a breakdown number for Sally.” In other words, she’s trying to save herself from tumbling into the abyss. “People associate the musical with wild, fun times in , but the show is really so much more substantive than that. It has a lot more dramatic underpinning than many people realize.”
Connors acknowledged that people will arrive at MTC with their own expectations, many of which may not gibe with what MTC is going to present, but he notes that “Everything we do here is a little bit different. I know that there’s a lot of curiosity about how we are gong to do this, to pull this off in a 45-seat theater. All I can say is, ‘Come and see.’”
What the audience will see, Connors suggested, is a powerful piece of theater, a study in human nature, a “well-documented slice of life.” He mentioned another of the show’s songs, “What Would You Do?,” and proposed that for him, it, rather than some of the show’s more familiar numbers, is the focus of the musical and it’s “message.”
“If you saw something going on around you that you thought was destructive,” Connors explained, “and you thought it was sending your entire world potentially spinning out of control, would you ignore it, would you go along with it or would you do what you could to stop it? The whole thing about ‘Cabaret’ is that in here life is beautiful, which means you can come in here and shut out what’s going on outside, but you can’t do that forever.” He paused and then added, “It’s a fascinating piece.”
“Cabaret” runs for three weekends from Nov. 4 through Nov. 20. For tickets or more information call 203-454-3883 or go to http://www.musictheatreofct.com/


Make sure to check out all of the reviews, theater news, casting calls, theater listings and general information about Theater at http://www.ctcritics.org/

For film reviews, go to http://susangranger.com/
Posted by Geary Danihy at 2:33 PM