One of the hottest tickets of this theater season is most likely going to be for ’s production of “Krapp’s Last Tape,” starring Brian Dennehy. Tickets went on sale this past Saturday for the Nov. 29 – Dec 18 run. As might be expected from playwright Samuel Beckett, it’s a dark, one-act play that has Krapp celebrating his 69th birthday by reviewing a tap made in his younger years and then making a tape to commemorate his 69th year. 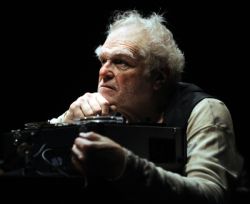 Brian Dennehy in the role of Krapp -
photo by Richerd Hein
Of Krapp, Beckett once wrote: "Krapp has nothing to talk to but his dying self and nothing to talk to him but his dead one." For tickets or more information you can call 203-787-4282 or go to http://www.longwharf.org/
Something quite interesting is going on over at . The school’s theater company, the Mainstage Ensemble, will be staging Bertolt Brecht’s The Caucasian Chalk Circle for two weekends beginning Thursday, November 3. The play is a parable about a peasant girl from the Russian Caucus region who finds a baby that has been left behind during a revolt. 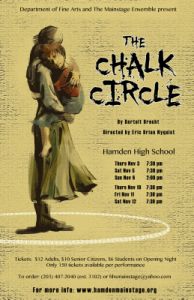 The play draws on both the biblical story of Solomon and Chinese myths as it focuses in on the nature of motherhood. The play is an interesting choice for a high school cast – should be interesting to see if the students can pull it off. For more info, call 407-2040 (extension 3102) or email the theatre at hhsmainstage@yahoo.com. More information can also be found at their website, http://www.hamdenmainstage.org/.
There are two productions of “Cabaret” opening on Friday, Nov. 4. One is at the Brookfield Theatre for the Arts, the other at MTC Mainstage in . The production has a full cast, while the MTC version has been scaled down to a cast of eight and has been “re-imagined” for the rather intimate venue. I’ll be sitting down with Kevin Connor’s, MTC’s executive artistic director, and the show’s director, to talk about what changes have been made to the classic musical – the interview will appear here early next week. In the interim, for tickets to the production, call 203-775-0023; for tickets to the MTC production, call 203-454-3883.
Change of plans for Square One Theatre Company in . The play originally scheduled for a Nov. 4th opening has been deep-sixed and in its place the venue will be offering A. R. Gurney’s “Ancestral Voices,” which will open Nov. 4 (lots of stuff happening that Friday!). For tickets, call 203-375-8778. Director and co-founder Tom Holehan explained via email that the cancellation was due to "a minor nightmare" having to do with "miscommunication between us and the leasing company."
Posted by Geary Danihy at 11:59 AM