A Moving "Mice and Men" 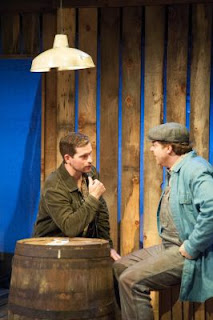 There are some moments in literature that, having experienced them, stay with you forever. One such moment is the close of John Steinbeck’s Depression Era novel (or novella or play-novelette – take your pick), “Of Mice and Men,” published in 1937, the title taken from Robert Burns poem “To a Mouse.” The line reads: "The best laid schemes o' mice an' men / Gang aft agley." The novel is on the American Library Association's list of the Most Challenged Books of 21st Century for its supposed vulgarity and racist language (right up there with Mark Twain’s “Huckleberry Finn,” for much the same reasons).

Steinbeck adapted the novel for the stage, and the play opened on Broadway in November of 1937. Subsequently, there have been two film versions, two TV productions, one radio play (2010 – the BBC), an opera, a 1974 Broadway revival, and numerous productions in regional and local theaters, including the current production at Playhouse on Park in West Hartford that, though slow to get off the ground and a bit flawed, eventually soars in the final act, so much so that there were audible gasps from the audience several times during the production’s final 20 minutes.

The story focuses on two itinerant field laborers, George Milton (Shannon Michael Wamser) and Lennie Small (an admirable Jed Aicher), who have been wandering the dusty roads of together for many years. Chased out of one town because Lennie couldn’t control himself -- he is a large man with limited intellect, explosive strength, and urges he finds difficult to control -- at the opening of the play they are heading for a ranch where they will once again do hard labor for weekly pay, taking one step forward as they take two steps back. But they have a plan, a scheme – they will scrape together enough money to buy a small farm of their own, a mini-Eden where Lennie will get to tend the rabbits, for he loves to stroke and cuddle soft, living creatures. It is a myth that George weaves over and over again for Lennie, so much so that it takes on a bardic nature, with Lennie demanding that George recite the exact words that describe the farm, his tending of the rabbits, and the ultimate goal of “living off the fat of the land.”

Yet such schemes oft go astray, as they do soon after George and Lennie arrive at the ranch, for there is an Eve waiting for them on their road to their mini-Eden in the form of the wife of the ranch manager’s son, Curly (Tony Knotts), a height-challenged young man handy with his dukes. Curly’s wife (Kimberley Shoniker) – for so she is referred to in both the novel and the play – is lonely – for conversation, she claims -- and visits the bunk house all to often, driving Curly mad with jealousy. The ranch workers – Slim (Dustin Fontaine), Candy (Robert Britton), Carlson (Ted D’Agostino), and Whit (Harrison Greene) – think Curly’s wife is a tart, and on his arrival George immediately senses danger, for Curly has problems with “big” men and Lennie has problems with soft, oh-so-touchable women.

Yet the dream, the scheme, initially seems to be close to becoming a reality, for Candy has saved some money, and once he hears of the dream he buys in. The mini-Eden is so seductive to these men who toil mightily only to spend their meager salaries on weekend whores and whiskey that Crooks (Clark Beasley Jr.), a black worker whose back was hurt while working on the ranch, says he will work for free if only he can go to this promised land of orchards and fields of alfalfa. Hopes quiver and rise, only to be dashed as tragic flaws destroy the dream.

The major problem with this production is the lack of emotional intensity Wamser brings to the pivotal role of George. Although he often raises his voice and strides about the stage with abandon (much too many motivation-less crosses apparently dictated by director Sean Harris), the emotions don’t seem to be coming from his character’s core. This is especially apparent in a pivotal scene dealing with Curley’s wife late in the third act (George’s world has just collapsed and yet, there’s not a tremor in his voice) and the final scene, where there is no sense of inner-conflict…and there damn well should be.

The same cannot be said for Aicher, who gives us a frightened, desperate, yet ever-hopeful and trusting Lennie, a man challenged by reality who tries ever so hard to get it right and remember George’s instructions. His performance drives the show and makes the final moments achingly sad. There are other worthy efforts, chief among them Shonkiker’s and Britton’s, for both of their characters are fully realized, and Beasley gives us a Crooks whose dignity and loneliness ennoble the man.

Since there is no credit for fight scenes, major kudos have to go to director Harris for the visceral staging of Curley’s brutal beating of Lennie and the deadly pas-de-deux Lennie and Curly’s wife’s perform in act three. Both are visually gripping theatrical moments – you won’t forget them.

Tina Louise Jones’ set design takes ample advantage of the Playhouse’s somewhat limited space, and Marcus Abbott’s lighting is effective. My only quibble with the creative team’s visible efforts is with Erin Kacmarcik’s costumes – clothing and shoes seem too fresh and new to be the garb worn by hard working, poorly paid men. This is especially true for the garb worn by George and Lennie – although Lennie’s does look a bit time-worn and travel-tested, George’s clothing simply doesn’t look like it’s been slept in.

“Of Mice and Men” is a tragedy of the inevitable, and in the end all you can ask of a production of this play is that it grippingly conveys the tragic downward spiral of two men who cling to a dream that cannot be. In this, Playhouse on Park’s production succeeds.