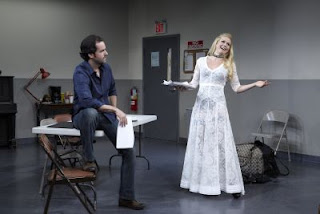 
In 1697, William Congreve penned these lines: "Heaven has no rage like love to hatred turned/Nor hell a fury like a woman scorned." Seems like nothing has changed in over three centuries, at least based on what is going on up at Hartford TheaterWorks, where a Woman (yes, it’s capitalized) takes a young playwright in hand and teaches him some lessons about the proper way to write a role for a woman and cast an actress in a play.

It’s TheaterWorks 27th year, and its opening offering is a production of David Ives’ “Venus in Fur,” which garnered rave reviews from critics during its Broadway run. Nina Arianda won a Tony in 2011 for her portrayal of Vanda; her understudy was Liv Rooth, who has taken on the Vanda role for the TheaterWorks production. No-brainer casting, for from the moment she “Knock-Knock-Knocks” on the door of the rather low-rent room where Thomas (David Christopher Wells) has been casting actresses for the role of Vanda, she transfixes the audience.

Thomas has adapted Leopold von Sacher-Masoch’s 1870 novella, “Venus in Furs,” for the stage, in the process capturing what he believes is a true love story about two people who have transformed themselves to better allow them to embrace true passion, which can be found only through domination. He’s also directing the play, since other directors he’s worked with just haven’t “gotten” what he’s written, but he has a problem: all of the actresses he’s seen so far have been woefully inadequate because, as he tells his fiancée over the phone at the start of the play, women today are, themselves, inadequate; they whimper, they whine, they say “like” a lot and are simply incapable of being feminine. 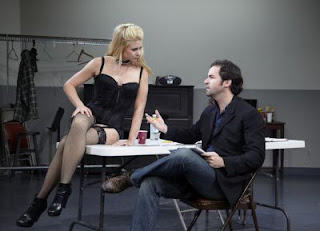 Enter Vanda, whose real name, she tells Thomas, is Wanda, but her parents, for some reason, called her Vanda. So, she believes, she’s perfect for the role, but she is everything Thomas has just described to his fiancée, plus. She’s profane, she’s brash, she’s prone to violent fits of temper, she’s decked herself out in dominatrix attire, and she seems to be the dumbest blond on the block. In essence, she’s Thomas’s worst female nightmare, so he tells her the casting call is over and attempts to send her on her way, but Wanda/Vanda isn’t having any of it. She’s determined to read for Thomas, and after telling him various tales of woe, giving him some tears and donning a dress she’s bought for the occasion, he reluctantly acquiesces and gives her a shot -- and in a wonderful, theatrical moment, Wanda/Vanda gives a reading of the first three pages of the play that are dead on. Suddenly, Thomas senses that, as counter-intuitive as it may seem, he may just have found his Wanda. Little does he know just how right he is.

Throughout the rest of this one-act play, Rooth easily, and delightfully, shifts back and forth between the brash, trash-talking Wanda and the cerebral, cultured Vanda of Thomas’s play, with a side trip as the goddess Venus channeled through Marlene Dietrich via Madeline Kahn, until the final moments of the play, when she becomes something totally different, a transformation accented by explosive lightning  (also used in the opening scenes as a bit of foreshadowing) compliments of lighting designer John Lasiter and sound designers Vincent Olivieri and Beth Lake.

Director Rob Ruggiero obviously understands both the playfulness and seriousness inherent in the play, as well as the need to keep things moving, for Vanda and Thomas engage in a fast-paced verbal and physical pas de deux with initial comic overtones that, ever so slowly, turns into something else entirely. Save for the opening moments, when Wells’ phone conversation is just a bit too studied, there’s not a false note as tables are turned, roles are reversed, and the ever fascinating male-female dynamic is placed under the microscope.

Wells has a tough task, given that Rooth has most of the best lines and, as Wanda, is a manic presence, but attention must be paid to his character’s transformation as well, for he must underpin Rooth’s more dynamic turns; he is the ice upon which Rooth does her arabesques, axels, spins and crossovers and without the ice the skater cannot skate. To shift metaphors, Rooth gets to be the fire, but Wells must be the containing, defining fireplace, for without his framing, his reactions, his character’s slow yet inevitable metamorphosis, Rooth’s character has nothing to play off of. Throughout most of the evening, playgoers’ eyes are on Rooth – how can they help but not be – but it is Wells’ solid performance that – let’s shift metaphors again -- is the stand that allows Rooth’s decorated Christmas tree to dazzle.

Marketing and advertising for “Venus in Fur” emphasizes the sado-masochistic aspects of the play – the under-18 crowd is shut out -- but they are, in reality, minimal, not offensive, and are certainly not the play’s main thrust (no pun intended). Anyone considering not attending because he or she is just “not into that stuff” should reconsider, for the play is really about human relationships, play writing, directing, and the roles enforced on us based on society’s gender-definitions.

So, if you go, (and you should, if you’re interested in engaging, witty, thought-provoking theater) revel in Rooth’s marvelous performance, but as you do, take note of how Wells’ “yang” makes Rooth’s “yin” shine.