"Next to Normal" -- Gripping and Visceral

"Next to Normal" -- MTC Mainstage, Westport -- Weekends Thru Nov. 4 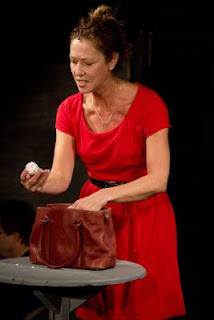 Juliet Lambert Pratt in the MTC MainStage production of "Next to Normal."
Photo by Kerry Long

A dysfunctional family has almost become a cliché in novels, short stories and plays, so much so that we may have become jaded when confronted with yet another fictional family falling apart. If so, then “Next to Normal,” which recently opened at MTC Mainstage in Westport, is a sure cure for our ennui, for it is one thing to read about a family clinging to normalcy by its fingernails and quite another to actually experience the desperation, confusion and fear inherent, and that’s exactly what happens in MTC’s intimate quarters.

The rock musical, with music by Tom Kitt and book and lyrics by Brian Yorkey, was nominated for 11 Tony awards in 2009 and, an even more impressive feat, won the 2010 Pulitzer Prize Award for Drama, and it’s easy to see why in MTC’s production, incisively directed by MainStage executive artistic director Kevin Connors, for the audience is slowly yet surely drawn into the lives of the Goodman family – via both dialogue and lyrics – as the impact of Diana Goodman’s bi-polar disorder on her family is painfully and poignantly revealed.

The responsibility for making this musical “work” falls heavily on the shoulders of the actress playing Diana, and though Juliet Lambert Pratt’s shoulders look too fragile to bear the burden, it only takes her delivery of the opening number, “Just Another Day,” to prove that her shoulders are herculean. Pratt is absolutely mesmerizing as she creates a highly nuanced picture of a woman fighting for her soul; her voice resonates and penetrates, and given her proximity to the audience, her every gesture adds color and depth to the portrait. As Diana, she is at times manic and at other times nearly comatose, and in between she attempts to deal with the family turmoil that her condition creates. It is a gripping, stunning performance.

The rest of the admirable cast creates characters that swirl around Diana’s emotional whirlpool that is stirred by the ghost of Gabe (an impressive Logan Hart), a son who died as a baby but has grown in Diana’s mind into a hale and hardy teenager who, we soon learn, harrowingly haunts his mother’s reality. Diana’s husband, Dan (Will Erat), clings to the fanciful hope that a cure can be found for his wife’s illness, and in so doing, clings to a denial that Natalie (Elissa DeMaria), their daughter, rails against while fearing that she herself might succumb to her mother’s illness. As Dan attempts to comfort his wife, Henry (Jacob Heimer), Natalie’s boyfriend, attempts to comfort the teenage girl – both men are less than successful in their efforts.

Hope for Diana is held out by the doctors who treat her (both played by Tommy Foster): Doctor Madden, her “psychopharmacologist,” has her on just about every pill available, pills Diana eventually dumps into the garbage as she sings “I Miss the Mountains”; Doctor Fine agrees to try talk therapy but eventually resorts to electro-shock and in so doing erases most of Diana’s memories, making the woman something of an emotional zombie whom the family attempts to bring back to life in a hauntingly beautiful yet painful scene that involves a box filled with family memorabilia.

The evening’s resolution is, at best, bitter-sweet, for Kitt and Yorkey do not take the easy way out. Yes, there may be “Light” at the end of the tunnel the Goodman family has traveled down, but this hope is tempered by the ghost who refuses to be exorcised from the family’s psyche. Be prepared to walk away from the theater emotionally drained yet thoroughly satisfied, for as Connors noted in his curtain talk, when he saw “Next to Normal” in workshop he knew that it was perfect for MTC. He was right – it is.