A Too Reverent "Raisin"

"Raisin in the Sun" -- Westport Country Playhouse -- Thru Nov. 3 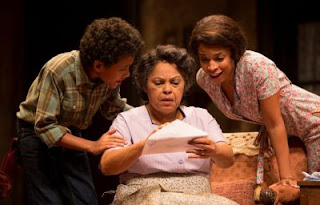 It’s been 53 years since Lorraine Hansberry’s “Raisin in the Sun” opened on Broadway, and a lot has changed in this country since then and, unfortunately, a lot has not. One thing that has changed is that the assumption that a black family is somehow “different” than a white family has been, by and large (except for hardcore bigots) laid to rest. One need only think of TV’s Huxtables and Jeffersons to realize that the black family is today well established in mainstream American culture, although some may carp that the Huxtabales and Jeffersons were nothing more than white families in blackface. I won’t enter that argument, for I can point to August ’s successful 10-play cycle, especially “Fences,” (1987) to suggest that there has been a balance. My point is the Huxtables, the Jeffersons and Wilson’s Maxsons all owe a profound debt of gratitude to Hansberry’s theatrical family, the Youngers, for America in 1959 was a world of de jure and de facto segregation, and Hansberry’s play was a gamble, a gamble that succeeded and, in the process, helped to bring about change.
That being said, given that the landscape has changed, how does one evaluate the current production of Hansberry’s play, directed by Phylicia Rashad, now on the boards at the Westport Country Playhouse? Well, I would be less than honest if I didn’t say that the first act, at 85 minutes, is at times like watching grass grow, and that’s because one of Hansberry’s stated intents in writing the play was to present details of black family life to a white audience. Well, that’s been done since 1959, again and again, so a lot of these details, epiphanic when first presented, now seem, if not beside the point, not the stuff of dramatic tension.
The Youngers – the mother, Lena (Lynda Gravatt), her children, Walter (Billy Eugene Jones) and Beneatha (Edena Hines), Walter’s wife, Ruth (Susan Kelechi Watson), and Walter and Ruth’s son, Travis (Luka Kain), live in a run-down flat in , a subdivision of ’s Woodlawn. However, they are expecting a $10,000 insurance check in the mail, death benefits from the demise of ’s husband, and this opens up the possibility for change. wants to use the money to buy a house; Walter wants to buy into a liquor store; Beneatha wants to finish medical school but is also a nascent radical. In other words, there’s familial tension over money, but it’s flavored by the specter of slavery in the lineage, religious belief and the function of the male in the black family
These are all themes – slave lineage; black capitalism; black fathers; the African mystique – that, subsequent to “Raisin in the Sun,” have been dealt with in plays, poems and novels thanks, in large measure, to Hansberry. But this production is not helped by the fact that the actors, all accomplished, often seem to be delivering their lines as if they have been written from on high; i.e., the production often reverences the text rather than realizes it. Hence, there’s a lot of half-beats that telegraph that an actor is about to say something important. Watson escapes this syndrome, as do the other actors…at times…but the tensions in the play often seem manufactured, and that’s because the text, a half-century old, is message-laden, and a play suffers when the primary intent is to deliver a message rather than create dynamic, interactive characters, and the actors are determined to deliver said messages.
The second act resolves a lot of the conflicts but, again, is message-laden, and Walter’s final rejection of the opportunity to make money off segregation – and degradation – and Beneatha’s confrontation with Joseph (Hubert Point-Du Jour), a Nigerian student who wants to marry her and return to his homeland, are “get the point?” set-pieces.
As ground-breaking as “Raisin in the Sun” was in 1959, this current production is more a lesson in civics, capitalism and race relations than a fully realized dramatic production. As flawed and dysfunctional as August ’s Maxson family is, we care about them; I can’t say the same for the Youngers.
“A Raisin in the Sun” runs through Nov. 3. For tickets, call 203-227-4177 or go to www.westportcountryplayhouse.org.