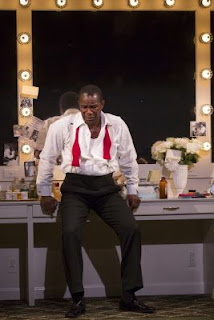 
So Santa Claus is standing there, going “Ho, ho, ho,” a big smile on his face, hands patting his round, red belly, and then all of a sudden he lets loose with a string of expletives that would make a sailor blush. Your eyes widen, your jaw drops. After you recover from the shock, the first thing that comes to mind is, what the hell, this ain’t the Santa you know. Could it be Santa isn’t the saint you thought him to be?

That’s the initial effect John Douglas Thompson has on the audience at Long Wharf as he, portraying Louis “Satchmo” Armstrong, cuts loose. This ain’t the Satchmo we remember, the smiling, laughing icon, sweat rolling down his forehead as he sings and plays his way into our hearts, rasping a “Hello, Dolly” greeting. This is Satchmo the man, a man who sleeps with whores, a man who has a long standing relationship with Mary Jane, a man who curses his manager, Joe Glaser, for having screwed him, a man who once worked for Al Capone, a man who, as the child of a whore, delivered coal to the New Orleans whorehouses to put bread on the table, a man who, at the top of his career, lovingly known as “Pops,” is bedeviled by slurs from members of his own race. He is called a “clown,” an Uncle Tom.

“Satchmo at the Waldorf,” by Terry Teachout, directed by Long Wharf’s artistic director, Gordon Edelstein, is a no-holds-barred look at a man whose stage persona belied the reality of his life, and is a tour-de-force for Thompson, who brings not only “Satchmo” to life at the end of the star’s career in 1971, but also creates his manager, Glaser, in one of those great stage transformations that requires an actor, using only body language and voice, to create an entirely different persona, in this case that of a hard-nosed Jewish businessman with mob connections. Assisted by lighting designer Stephen Strawbridge, Thompson does this so flawlessly that, the first time it occurs on stage it almost takes your breath away.

In chronicling Satchmo’s life, the play also chronicles the life of our country during most of the 20th century, for Armstrong was born into an era when segregation, both de facto and de jure, was a fact of life -- for much of his early career Armstrong couldn’t stay at most of the hotels where he played. It also captures the complicated relationships imposed on whites and blacks by society, a relationship that would have a race in general held in contempt but have a specific member of that race looked kindly upon.

This conundrum is at the heart of the connection between Glaser and Armstrong, and Teachout relies on dramatic irony to limn the nature of the relationship and its misunderstandings, for Glaser, whose company Armstrong was pivotal in building, dies without leaving Satchmo a share. Hence the curses Satchmo calls down upon the dead man’s head, but there’s more to the story, and in a pivotal scene near the end of this one-act play, Thompson rapidly switches back and forth between the two characters to reveal the disconnect and, in the process, capture the essence of the two men and their long-standing yet troubled relationship.

Was Satchmo’s stage persona totally fabricated? The play would say no, for Teachout returns again and again to Armstrong’s innocence and good heart, and Thompson is such a nuanced actor that even when Satchmo is in full-curse mode, calling down fire and brimstone on Glaser, there is a sense that there’s a part of Armstrong whose heart is not really in it, that no matter what he thinks Glaser did to him, he still loves the man.

And then there’s the music, Satchmo’s music, or storytelling, as Pops would have it. Here the playwright, who is the theater critic for the “Wall Street Journal” and the author of “Pops: A Life of Louis Armstrong,” is at his best, allowing Satchmo to describe, in vivid, loving prose, what music means to him, what the sounds he has created over the years evoke, and how his heart soars when the trumpet’s mouthpiece touches his lips.

That the play is set in the last years of Armstrong’s life (he comes off stage and immediately goes to an oxygen mask), and that as the trumpet player looks out at the Waldorf audience during one of his his final appearance and sees not a black face in the crowd (the audience looks like a carton of eggs), makes for a bittersweet mood, for Satchmo lived in the times that were given to him and when the younger generation of black jazz musicians turned against him -- Dizzy Gillespie and Miles Davis (another persona Thompson artfully, if somewhat chillingly, creates) are two who demeaned Satchmo -- Pops was hurt, confused, and just a bit bitter.

Louis “Satchmo” Armstrong lived his life in troubled times, and perhaps, confronted by “how things were,” went along to get along, but that judgment is hindsight, for the man worked with what he was given, played the cards dealt him at the table he was told to sit at, and in the process made millions of people happy, something he cherished…and was condemned for by those who followed in his footsteps and vilified him for selling out. This conflict Thompson captures in his rendering of Armstrong’s delight in moving an audience with his music and Davis’s wish that, should he have but one hour left to live, he would spend it strangling a white man...slowly. You believe Satchmo, and you believe Davis, and that’s because Thompson makes you believe.