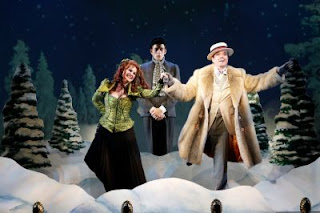 There’s murder afoot up at Hartford Stage, murder motivated by revenge, revenge for a family wronged. And it’s in a musical. No, it’s not “Sweeney Todd,” Stephen Sondheim’s dark and brooding tale of the demon barber of Fleet Street, for Sweeney wouldn’t be caught dead in this musical. Given the barber’s dyspeptic nature, I doubt he would enjoy a moment of “A Gentleman’s Guide to Love and Murder,” but that’s Sweeney’s problem, for the opening night audience absolutely adored this light, frothy, witty tale of a young man’s rise to titled wealth over the bodies of his murdered relatives.

Originally developed at the Sundance Institute Theatre Lab, “A Gentleman’s Guide,” with book by Robert Freedman, music by Steven Lutvak and lyrics by both, (with more than a nod to the 1949 film, “Kind Hearts and Coronets”) tells the tale of one Monty Navarro (an engaging Ken Barnett), a young man who, on the death of his mother in 1909, learns to his surprise that he is ninth in line to the title of Earl of Highhurst, a title that has been in the D’Ysquith family for centuries. Brought up in impoverished conditions by his mother (his father dying when he was 7), he was unaware of his mother’s banishment from the D’Ysquith family for marrying beneath herself – Monty’s father was a Castilian and a musician to boot.

Monty rushes to tell his paramour, Sibella Hayward (the exquisite Lisa O’Hare) of his heritage only to have her disbelieve him and flaunt that she is being courted by a rich man. Distraught and, after reading his mother’s letters to her family – all returned unopened – and rebuffed by the D’Ysquith’s, he determines that the elimination of those who stand in front of him for the earldom will serve two purposes: revenge for the family’s treatment of his mother and a way to win Sibella’s somewhat mercenary heart. The only problem is: how to kill his victims without incriminating himself?

What follows is merry murder and mayhem, all done to lively, witty tunes that are filled with double-entendres. Perhaps one or two too many tunes, but when the production seems threatened to drag (some of the melodies sound repetitive), there’s a production number to save the moment, sung and danced by a stellar cast.

The show’s main drawing point, however, is that all of the D’Ysquith’s, save for young Phoebe D’Ysquith (the enchanting Chilina Kennedy) and Lady Eugenia (Heather Ayers), are played by the same man, Jefferson Mays, who should have negotiated his salary on a per-costume-change basis. Mays is, at one time or another, lord of the manor, a simpering prelate, an over-muscled army major, a somewhat fey bee keeper, a dowager desperate for a cause (starving Egyptians, lepers, African cannibals – any needy group will do), a bad actress murdering the role of Hedda Gabler (her demise is especially explosive), and the head of a stock trading company and his overbearing, philandering son, and each is a distinct character rife with idiosyncrasies. It would be an understatement to say that this is a bravura performance. Watching Mays create character after character in broad, music-hall strokes is, in itself, worth the price of admission.

As noted, there are moments during the evening that seem to work against the on-rush of murderous events. The Monty/Sibella duets seem repetitive and Mays’ “Looking Down the Barrel of a Gun” is over-long and overwrought, but these moments are more than balanced by numbers so delightfully staged by director Darko Tresnjak and choreographer Peggy Hickey that you wish they would not end.

Though this is not “Sweeney Tood,” it’s obvious that Freedman and Lutvak have studied the master’s work. There’s a witty “Warning to the Audience” at the start of the show, urging those with weak stomachs or hearts to leave while they still have the chance, the delightful “Better With a Man,” the first act’s closer, “The Last One You’d Expect,” and perhaps the most visually and musically satisfying number of all, “I’ve Decided to Marry You,” which features Barnett, O’Hare and Kennedy, with Sibella in Monty’s bedroom, Phoebe in his front parlor, and Monty between the two women who are separated by a pair of doors. It’s a delicious, extended moment. In fact, any time the two female leads get to share the stage there’s a vocal frisson that never ceases to please.

The production team seems to have had as much fun in the staging of the show as the cast, for the work of scenic designer Alexander Dodge, costume designer Linda Cho, lighting designer Philip Rosenberg, sound designer Dan Moses Schreier and projection designer Aaron Rhyne is absolutely stellar. The group has collectively created a surprise-laden feast for the audience’s eyes and ears replete with dancing suits of armor, eye-blinking lightning and sets that run from a Gorey-esque cemetery to a flower-laden bower and a regal dining room, all framed by a candy-box stage with a proscenium that bears the D’Ysquith family name.

I wouldn’t be surprised if Hartford Stage decides to extend the run of “Gentleman’s Guide.” Based on comments I overheard made by mingling audience members, the show will enjoy strong word-of-mouth.